Home/News/Blog/Storytelling with Art and Science: Q&A with…

Storytelling with Art and Science: Q&A with Dr. Harry Brünjes of Dial Medicine for Murder

Great storytellers have to utilize many skills to have an impact. For one particular storyteller, it is the connection between art and science that allows him to effectively capture his audience.

I recently had the opportunity to speak with Dr. Harry Brünjes, one of the presenters and creators of Dial Medicine for Murder, coming to the Booth Playhouse September 19.

Dial Medicine for Murder is presented in association with the British American Business Council Charlotte and is a docudrama style production about Dr. Harold Shipman and Dr. John Bodkin-Adams, two of the most dangerous and infamous British serial killers of the 20th century.

We spoke about how the production came together, how the audience plays an integral part and how the intersection of art and science influence this fascinating docudrama stage production.

Donnie Bales: How did the production of Dial Medicine for Murder come into fruition?

Harry Brünjes: It was pure serendipity. I bought my current home, Folkington Manor, on the South Downs in Sussex a few years ago. I was not aware that Dr. John Bodkin-Adams had such a close association with the estate in the decade following the Second World War. My friend [and co-presenter], Dr. Andrew Johns, had given evidence to the Dr. Harold Shipman enquiry. We discussed these two notorious physicians over lunch and realised how much they had in common in terms of their story, psychopathology and behavioural traits. Initially we wrote a lecture which, with time, metamorphosed into a docudrama stage production.

We discussed these two notorious physicians over lunch and realised how much they had in common in terms of their story, psychopathology and behavioural traits.

HB: As the production matured so did the reaction of the audience. From the stage you can feel individuals becoming more enthralled by the detail, the characterization of individuals, the associated photographs and how the stories unraveled. The Q&A moment is always revealing, robust and the range of questions has been unpredictable from venue to venue. We have always been thrilled that the narrative creates so much energy.

DB: In addition to being a trained physician, you’re also a professional pianist and the current chairman of the English National Opera. Can you talk about how the intersection between science and art is showcased in the production and whether your love of one is greater than another?

HB: Between the ages of 16 and 26, I had a double life as a student/university student/medical student in the daytime and a comedian/musician in the evening. In my after-dinner routine, I always say my life has been an interface of 'science & show business’ and ‘music & medicine.’ I feel as equally at home in a 'London Theatre' as I do an ‘Operating Theatre'. There are a lot of similarities. Both professions are about dealing and sharing with people. I have enjoyed every aspect of my career in equal measure.

DB: How has your knowledge of science informed your career as a storyteller?

HB: As a comedian you tell stories and as a doctor you listen to stories. There are some very funny things and some very serious things in science in equal measure. However, I always say that the most serious profession of them all is comedy. The combination of intensity, intelligence, anxiety and indeed fear that goes into structuring a routine is compelling. That said, comedians and surgeons have a lot in common. They both rehearse over and over again and both are determined, if not desperate, to get it right.

As a comedian you tell stories and as a doctor you listen to stories... That said, comedians and surgeons have a lot in common. They both rehearse over and over again and both are determined, if not desperate, to get it right.

DB: You and Andrew Johns met as medical students. How has your relationship changed from studying alongside one another at Guy’s Hospital to creating and now touring with a show?

HB: Andrew and I first met in 1974. We have been friends all that time and I don’t think our relationship has altered. Andrew is a fine banjo player and violinist. We entertained together, even as medical students. We never expected to present a show together at this stage in our careers, but the juxtaposition is that it is no surprise either. We have loved the preparation, the production and the touring.

We believe it is a unique story, a fascinating comparison and should create much discussion and reflection.

DB: Did you have an interest in true crime before you began working on the show?

HB: I have no interest in crime although my wife and four children often say that I should be locked up. Andrew, on the other hand, is one of the UK’s leading forensic psychiatrists and has given evidence at the Old Bailey, London [the Central Criminal Court], at least 100 times, throughout England and indeed around the world.

DB: What should audiences expect from an evening at Dial Medicine for Murder?

HB: At the very least we hope they will leave the theatre both entertained and educated. We believe it is a unique story, a fascinating comparison and should create much discussion and reflection. However, we do say at the end of the show that the audience must not lose its faith in doctors. The risk of meeting a Shipman or an Adams is less than dying in an air crash. We hope our audience when unwell will still ‘dial for medicine.'

For more information on Dial Medicine for Murder, click here. 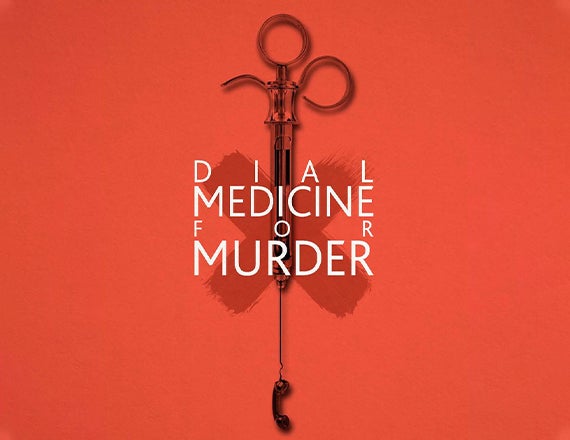 Dial Medicine for Murder
Get Tickets

Dial Medicine for Murder: The Story of Shipman and Bodkin-Adams Presented in association with the British American Business Council Charlotte "The subject matter is…