The Charlotte premiere of JAGGED LITTLE PILL will open next week on Tuesday, November 29 for eight performances only through December 4 at the Belk Theater. Inspired by the seminal rock album of the same name by seven-time Grammy Award winner Alanis Morissette (she/her), tickets to the Tony and Grammy Award–winning production are on sale now at blumenthalarts.org.

Dillon Klena (he/him), who plays Nick Healy, will perform the national anthem at the Carolina Panthers football game against the Denver Broncos on Sunday, November 27 at 1 pm.

Two members of the JAGGED LITTLE PILL company are native Charlotteans: Maya J. Christian (Ensemble, Swing), a former student at Hickory Ridge High School, and Ashani Smith (Assistant Stage Manager), a graduate of Northwest School of the Arts. Their Charlotte arts and Blumenthal roots run deep, both having competed in the Blumenthal High School Musical Theater Awards—also known as the Blumeys—Maya as a performer and Ashani as a student critic.

Ashani said, "Growing up here in Charlotte, I would see so many shows at Blumenthal (some of which I still have the show posters for!). Now being able to bring my second Broadway national tour to the very place where I took dance classes, master classes, watched my friends win awards, and learned how to be an artist, is so surreal and full circle. Even now, as a Stage Manager, every show I saw and every ounce of training I got in Charlotte got me to where I am today. I cannot wait for the city to see our show!"

Maya added, “I would see shows at the Belk Theater and that’s part of the reason why I’m doing what I’m doing. The Charlotte art scene is important to me. We’re not only excited to go home but to show the cast the love we have for Charlotte.”

Directed by Tony Award winner Diane Paulus (she/her; Waitress, Pippin), JAGGED LITTLE PILL is an “electrifying, visceral and stunning” (The Hollywood Reporter) musical with an original story by Tony and Academy Award-winning writer Diablo Cody (she/her; Juno, Tully), about a perfectly imperfect American family that “vaults the audience to its collective feet” (The Guardian). Nominated for a season-record of 15 Tony Awards following its Broadway premiere, The New York Times declared the show “redemptive, rousing and real… JAGGED LITTLE PILL stands alongside the original musicals that have sustained the best hopes of Broadway.”

Ignited by Morissette’s groundbreaking lyrics and music – from beloved hits such as “You Oughta Know,” “Head Over Feet,” “Hand In My Pocket,” and “Ironic”, to brand new songs written for the show – JAGGED LITTLE PILL  features explosive choreography by Tony Award nominee and frequent Beyoncé collaborator Sidi Larbi Cherkaoui (he/him; “Apesh*t”, “Love Drought/Sandcastles” Live at The Grammys), and the raw power of an onstage band under the Musical Supervision, Orchestrations & Arrangements of Grammy, Tony and Pulitzer Prize winner Tom Kitt (he/him; Next to Normal, American Idiot).

JAGGED LITTLE PILL officially opened on Broadway December 5, 2019 at the Broadhurst Theatre after beginning previews November 3. Prior to Broadway, JAGGED LITTLE PILL completed a record-breaking, sold-out run at American Repertory Theater (A.R.T.) in Cambridge, MA. That pre-Broadway world premiere production ran for 79 sold-out performances, from May 5–July 15, 2018, marking the longest-running and highest-grossing production in A.R.T.’s history. JAGGED LITTLE PILL concluded its award-winning Broadway run on December 17, 2021, after playing 36 previews and 171 performances. That same month, the production made its international debut in Australia at Theatre Royal Sydney. The Australian tour is currently playing at Comedy Theatre, Melbourne.

Released on June 13, 1995, the tremendous success of Alanis Morissette’s album Jagged Little Pill skyrocketed her to become the bestselling international debut artist in history; a title she still holds, with the record’s sales reaching 33 million copies worldwide. Now, 25 years after its release, Jagged Little Pill continues to be one of the Top 20 Best-Selling Albums of All Time. With ten eclectic and acclaimed albums released over the subsequent years, Morissette’s music has garnered 7 Grammy Awards (with 14 nominations), a Golden Globe nomination, and total sales of over 60 million albums.

In 2019, Atlantic Records partnered with the Broadway production for the release of its Original Broadway Cast Recording, adding the show to the label’s elite roster of Grammy Award-winning artists and cast albums. The cast album for JAGGED LITTLE PILL was officially released on December 6, 2019 – the day after the show’s opening night on Broadway – and won the 2021 Grammy Award for Best Musical Theatre Album.

In the fall of 2020, the musical garnered a season-leading 15 Tony Nominations – including Best Musical – and Grand Central Publishing released a hardcover coffee table book following the journey of JAGGED LITTLE PILL to Broadway, with behind-the-scenes photos and stories from Alanis Morissette, Diablo Cody, the cast and more. Following the show’s big Grammy Award win in 2021, JAGGED LITTLE PILL also won Tony Awards for Best Book of a Musical (Diablo Cody) and Best Featured Actress in a Musical (Lauren Patten).

For more information and a complete list of tour stops, please visit: JaggedLittlePill.com. 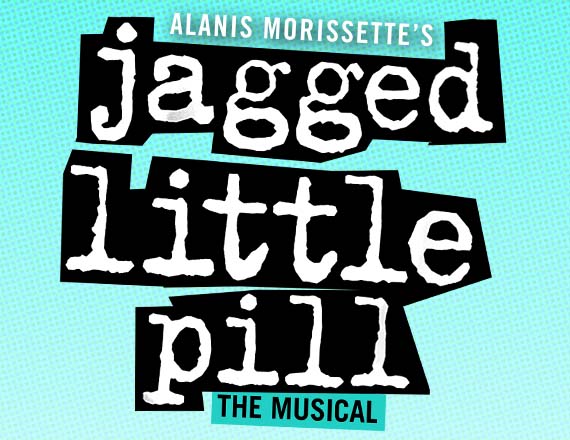 Groups of 10+ receive 10% off, plus one complimentary ticket.