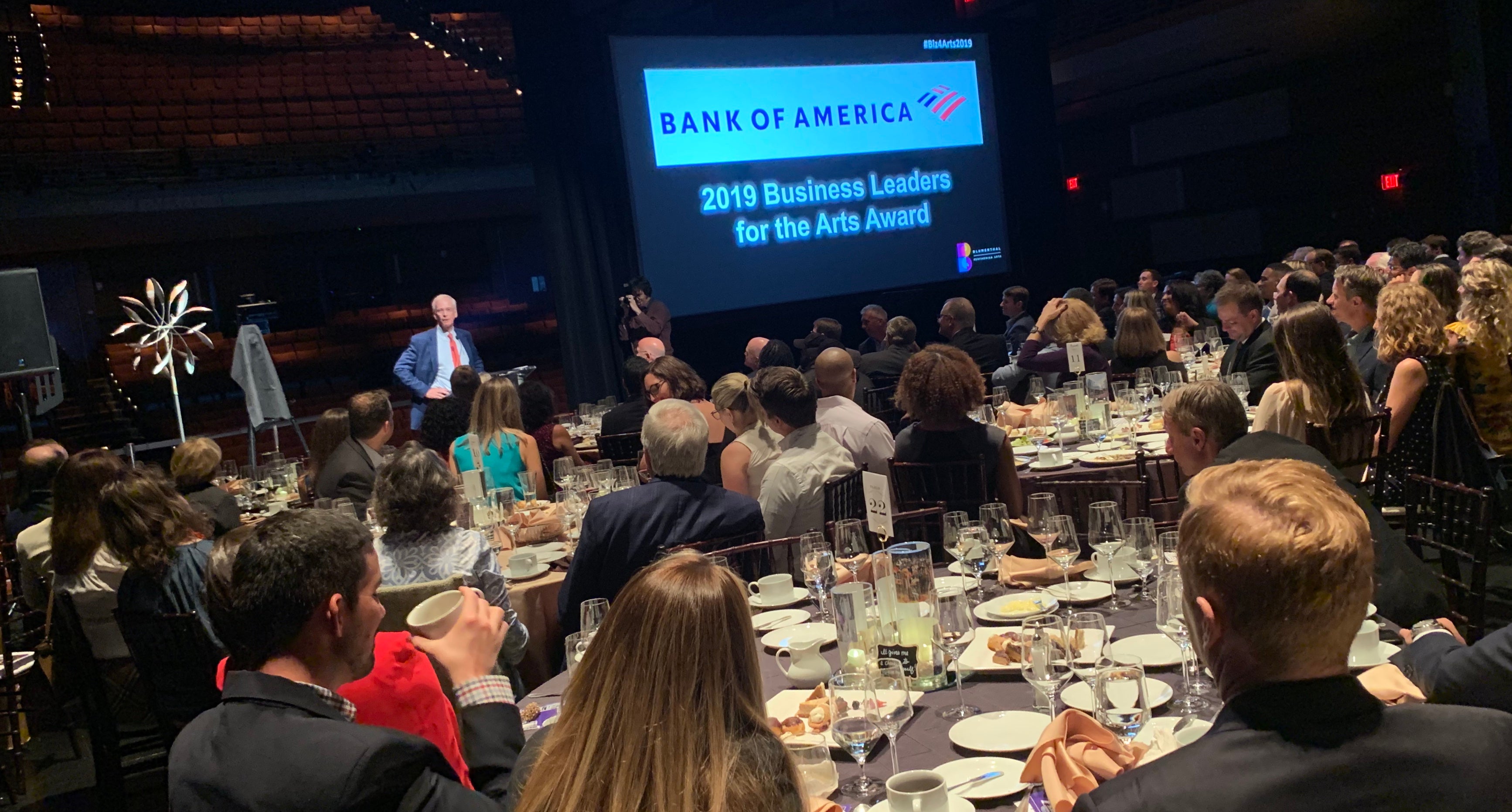 (October 3, 2019) Charlotte, NC – Blumenthal Performing Arts is proud to announce Bank of America as the recipient of its fourth annual Business Leaders for the Arts award, which was presented during a celebration dinner at Knight Theater on October 2nd.

Charles Bowman, Charlotte market president and North Carolina state president for Bank of America, accepted the award in recognition of the company’s leadership, investment and commitment to the arts. 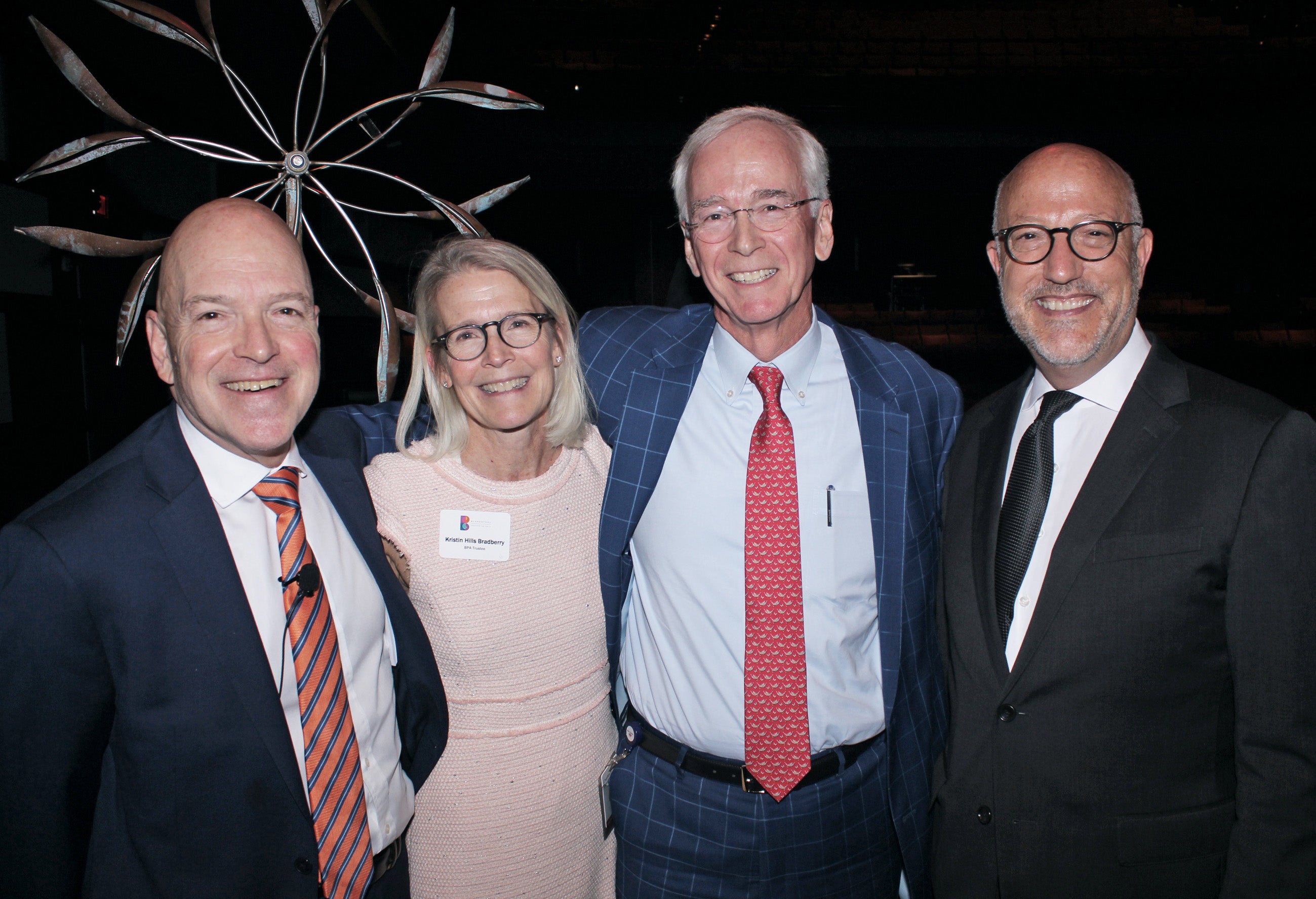 The company is a true leader in helping the arts flourish across the globe. Through its Art Conservation Project, Bank of America has provided grants to museums in 31 countries for more than 150 conservation projects. The bank’s Art in Our Communities® program has also allowed more than 130 museums and nonprofit galleries worldwide to borrow complete exhibitions from Bank of America’s collection at no cost, for the benefit of the community. And, now in its 22nd year, Museums on Us® offers Bank of America credit and debit card holders the opportunity to visit more than 225 cultural institutions in the United States free of charge on the first full weekend of every month.

“Bank of America believes the arts matter,” said Bowman. “They help communities thrive, help individuals connect with each other and across cultures, and educate and enrich societies. We’re incredibly honored with this recognition of our efforts. Blumenthal Performing Arts is a vital contributor to Charlotte’s arts culture.”

Bank of America has been a longtime partner of Blumenthal Performing Arts, and we value the integral role it plays in the national and global arts landscape. As Blumenthal plans for its future growth, from community access to arts programs to building enhancements, we know Bank of America will help make the organization a place for everyone.

“Bank of America has been a partner since Blumenthal Performing Arts was created in 1987.  Bank of America had the foresight to carve out space for a new Performing Arts Center when building its headquarters in the early 1990’s,” said Blumenthal President/CEO Tom Gabbard. “Uptown was a different place back then, without a single restaurant open after 5:30pm. Creating a busy hub for arts and entertainment helped to change that. Together the organizations have worked hard to make Charlotte the vibrant uptown we enjoy today.”

“Elliott Davis proudly supports Blumenthal Performing Arts and its mission to enrich Charlotte and surrounding areas by fostering a deeper understanding of, and appreciation for, artistic expression and cultural diversity. Blumenthal’s efforts to celebrate and share the beauty of art in all its forms help to encourage creativity and innovation, build community cohesiveness, and stimulate economic growth.”

Blumenthal’s Business Leaders for the Arts is a network of local businesses that believe the arts are vital to the community, economy, education and workforce of tomorrow. Members gather quarterly to gain insight into industry trends and to celebrate the impact of the business community’s investment in the arts. For more information on joining Blumenthal’s Business Leaders for the Arts, visit: BlumenthalArts.org/BBLA. 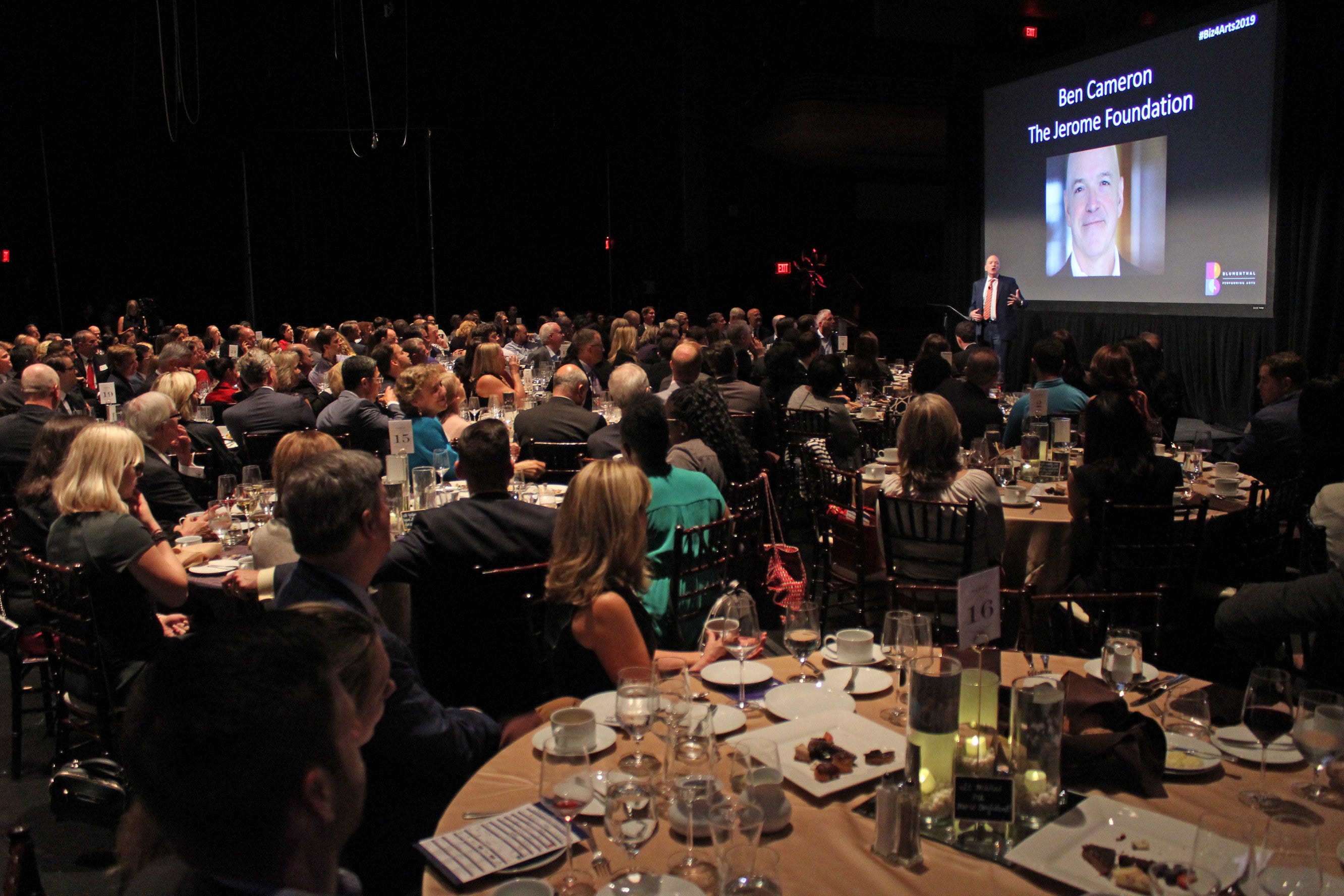 The ceremony’s featured speaker was Ben Cameron, President of the Jerome Foundation. Cameron was the Program Director for the arts at the Doris Duke Charitable Foundation (2006-15), where during his tenure, the Foundation created the Doris Duke Artists Awards and received the National Medal of the Arts from then-President Barack Obama. He previously served as the Executive Director of the Theatre Communications Group, as the Senior Program Officer for the Dayton Hudson Foundation and Manager of Community Relations for Target Stores, and as the Director of the theater program at the National Endowment for the Arts. He received a Master of Fine Arts from the Yale School of Drama, a Bachelor of Arts with honors from UNC-Chapel Hill and is a recipient of three honorary degrees. He currently serves on the Board of Directors for the Minnesota Council on Foundations.

The dinner also featured a special performance from TwinNation, a local dance group organized by 27-year-old twins Sanwone and Santae Benjamin. Active members of the dance community for as long as they can remember, the brothers danced wherever they could – from school and local YMCAs to the streets of Charlotte. TwinNation’s first big break came in 2015 when the brothers were asked to be a featured act at Breakin’ Convention, presented by Blumenthal Performing Arts. Since then, they have appeared as contestants on “America’s Got Talent” as well as in a mini documentary titled “From Street to Stage” showcasing their lives, journey and plans to change the world with dance.

In 2020, TwinNation will begin their “Streets to the Stage Dance Tour.” In addition to performing, the brothers teach a weekly, low-cost class on Friday Nights incorporating all styles of dance to help dancers have hands-on experiences, learn about their craft, book talent and change lives. Their specialty of hip-hop choreography combined with jazz and modern dance allows them to inspire other young people with a shared passion for dance.