Charlotte-based composer and sound designer Jason Hausman has written music for just about everything, from TV jingles to film scores. His Emmy Award-winning studio Hot Sakē, located in South End, works with clients around the world including major brands like PBS, Sony Pictures and GE.

But his latest project may be the biggest one yet.

Thematically, too, the artwork—which Parer conceived of as a modern-day riff on Auguste Rodin’s famous statue, “The Thinker”—led Hausman to explore topics of a grand proportion, including humankind’s place in the world, both today and throughout world history. It also made him reflect on our evolving view of the cosmos.

“Where that started, as a flat earth and the center of everything," he says, "to where we are today and the way we see things… that’s the way I approached the whole thing.”

It’s the first-time music will accompany one of Parer’s works, who is known for her huge installation projects. You may recall "Intrude," her giant rabbits that popped up around uptown Charlotte in 2019 and 2021.

For this composition project, Hausman created two different versions. One he has dubbed “Day” and the other “Night.”

Day has brighter, uplifting sounds and Night is darker, using minor tonalities, although both share some common themes and instrumentation. Hausman says that’s typically the way he works with commercial clients too, giving them at least two options from which to choose.

After debuting at the festival, the compositions will be available on streaming sites, including Spotify and Apple Music.

Both pieces are 30 minutes long and have 25 different parts voiced by a variety of instruments. Hausman wrote the main piano theme and asked Charlotte-born pianist Derel Monteith to perform it. “I knew his virtuosity on the instrument would take my piano theme to the next level,” Hausman says. “It’s a stunning performance.” Other sounds you will hear include a vibraphone, two guitar passes—one playing chords with “a ton of delay and reverb,” and another one with an EBow—a magnetized bow that vibrates the metal strings and makes them resonate.

Incorporating the human voice was especially important to Hausman, who drew part of his inspiration from sounds like Gregorian Chants and Tibetan Chants, as he tried to imagine what the universe would sound like. In the piece, he says, sometimes the voices are recognizable and at other times, after being altered using a sampler, they are not. However, they still retain an organic quality. 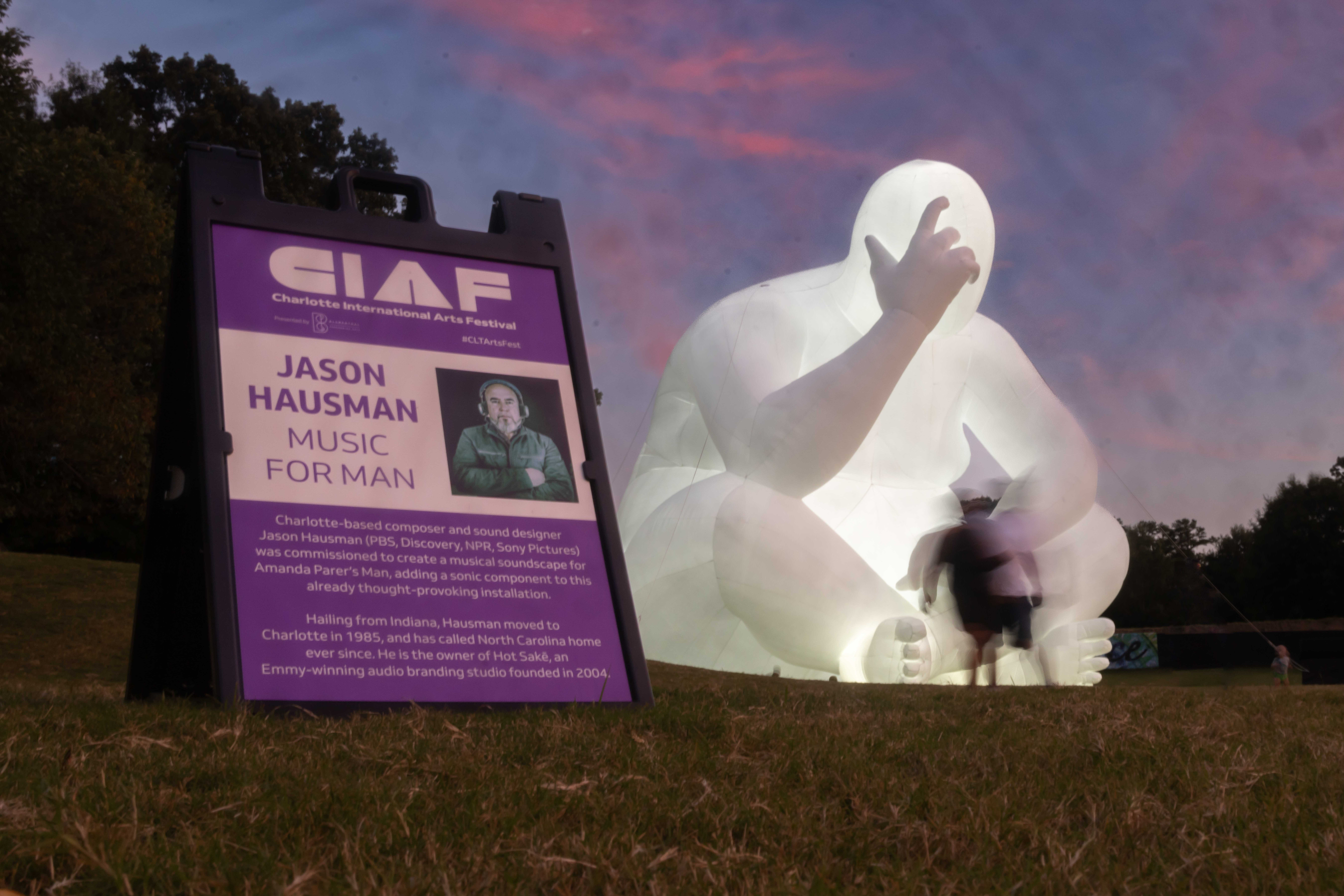 “I wanted to make sure it was human and that it felt that way,” Hausman adds. “...I really wanted to bring that forth and make people contemplate how wonderful it is to exist.”

As he composes, Hausman loves to experiment. Sounds can be combined, reversed and distorted in all sorts of ways.

"I think of it like watercolor," he says. "I just start painting, and if I make a mistake in the paint, I just paint over it."

Hausman’s striking red-walled studio/office is packed with instruments—about a dozen guitars, a banjo, a bass and a drum set. Some get incorporated into his compositions. Most sounds, however, he creates or manipulates through his laptop, using a keyboard and drum pads. He says he can write his scores from almost anywhere.

But the seeds of his ideas—no matter how grand the topic—tend to take root in the most human of habitats. “I write almost everything in my head,” he says, “either in the shower or in the car.”

“Man” can be seen (and heard!) at Ballantyne’s Backyard, 11611 North Community House Road in Charlotte, through Oct. 2. For more info on CIAF, visit charlotteartsfest.com.