Some artists work in oils or pastels. Harold Logan works in liqueurs with a splash of grenadine.

Logan, the Special Events Manager within Blumenthal Performing Arts’ Food and Beverage department, has been busy crafting drinks that please the palate and the eye.

He and his team have developed 14 new Broadway-themed cocktails for guests to try throughout the 2022-’23 season. Each drink will be available for a limited time only, during the specific production that inspired its creation. 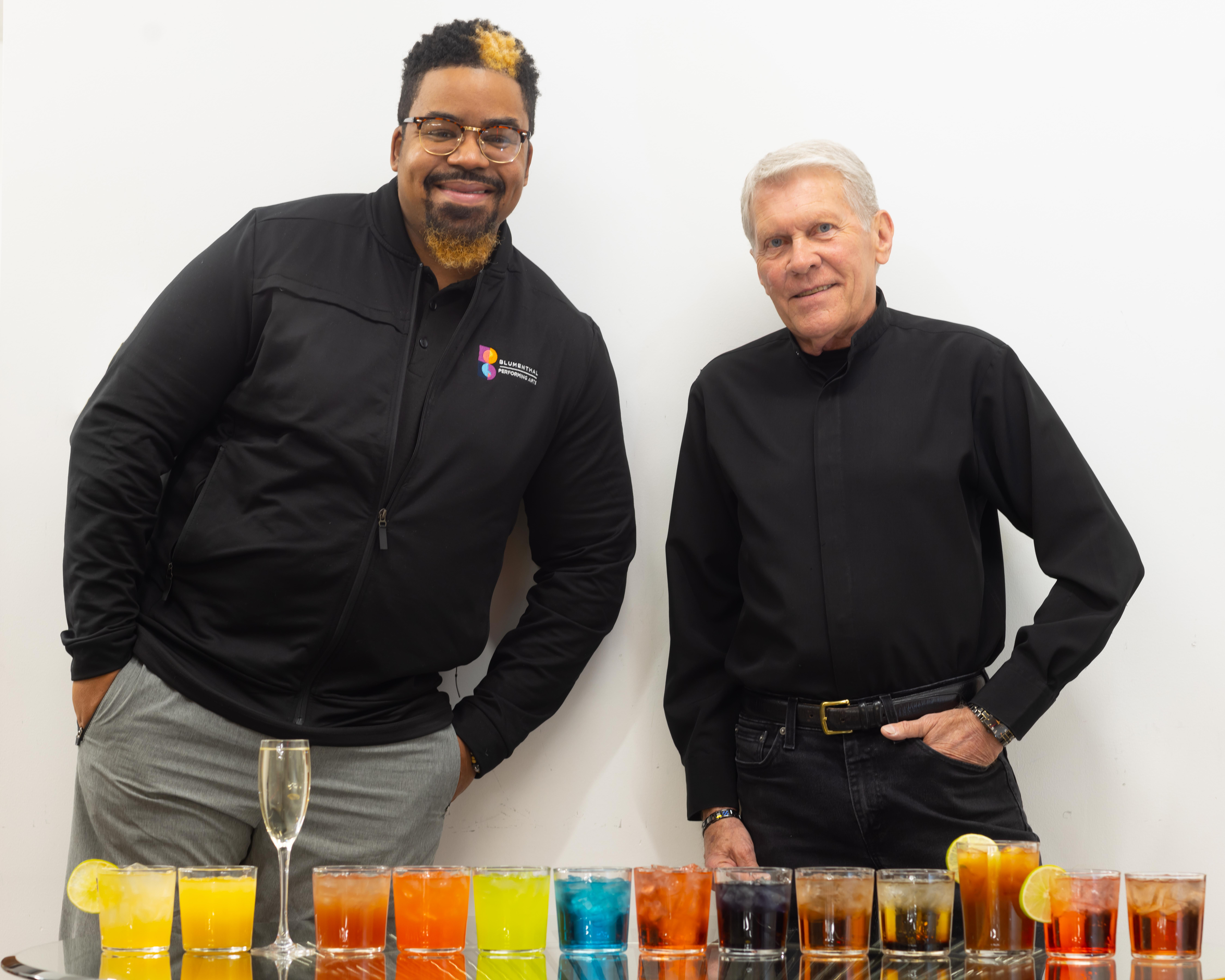 For Logan, the goal is to provide something special to enhance guests’ time at the theater and help build anticipation for the season ahead.

Logan, who has worked more than 15 years in the food/hospitality industry and holds a degree from Johnson & Wales University in Restaurant/Food Services Management, has been part of Blumenthal's team for nearly six years. This isn’t the first time he has created specialty drinks for Blumenthal events.

But in the past, his concoctions have come together right before a show arrives in town, as an unexpected surprise for guests at the theater.

Seeing their success and the popularity this fall of “Brush Stroke”—the new signature beer that Logan partnered with Heist Brewery to custom brew for Blumenthal’s inaugural Charlotte International Arts Festival—he saw potential to design a full lineup of themed drinks to bring to the theater.

So he set out to meet the challenge with flavor and pizzazz.

For Logan, that meant more than simply coming up with fun names. In taste and looks, he wanted his creations to evoke the essence of a show. He researched all 14 productions, the characters and the artists involved to capture nuances via his signature drinks.

“It’s so cool to be able to geek out on theater, man, and I love this stuff,” Logan says. “I really enjoy it.”

That research led him to discover, for example, that Michael Jackson’s favorite drink was White Moscato. And you’ll see that as a key ingredient in “Iconic,” the specialty cocktail for MJ: The Musical (available at performances September 27 - October 8, 2023 in Belk Theater.) Logan developed his slate of drinks and tested them out first with his wife’s help. “We did a lot of workshopping at home,” he says with a laugh. “...We had a ball and we were safe doing it because we were in the confines of our home, so that was cool. We had a wonderful night over some drinks and some music.”

But making tasty and visually appealing drinks was only part of the equation.

“We also wanted to create a seamless approach with our bartending staff,” he says.

Bartenders need to be able to prepare and serve drinks efficiently, whether it's during the more leisurely pre-show hour or during a brisk 20-minute intermission of a sold out Broadway show. That’s where, he says, the aid of JP Smith Blumenthal’s most seasoned bartender, was pivotal.

Together, they workshopped the whole spectrum of offerings.

That led to some modifications—like with “Patriot’s Pride”—the cocktail creation for the musical 1776 (coming to Belk Theater June 6 - 11, 2023). Logan wanted a drink that was red, white and blue but the recipe he came up with had too many steps, in practice. 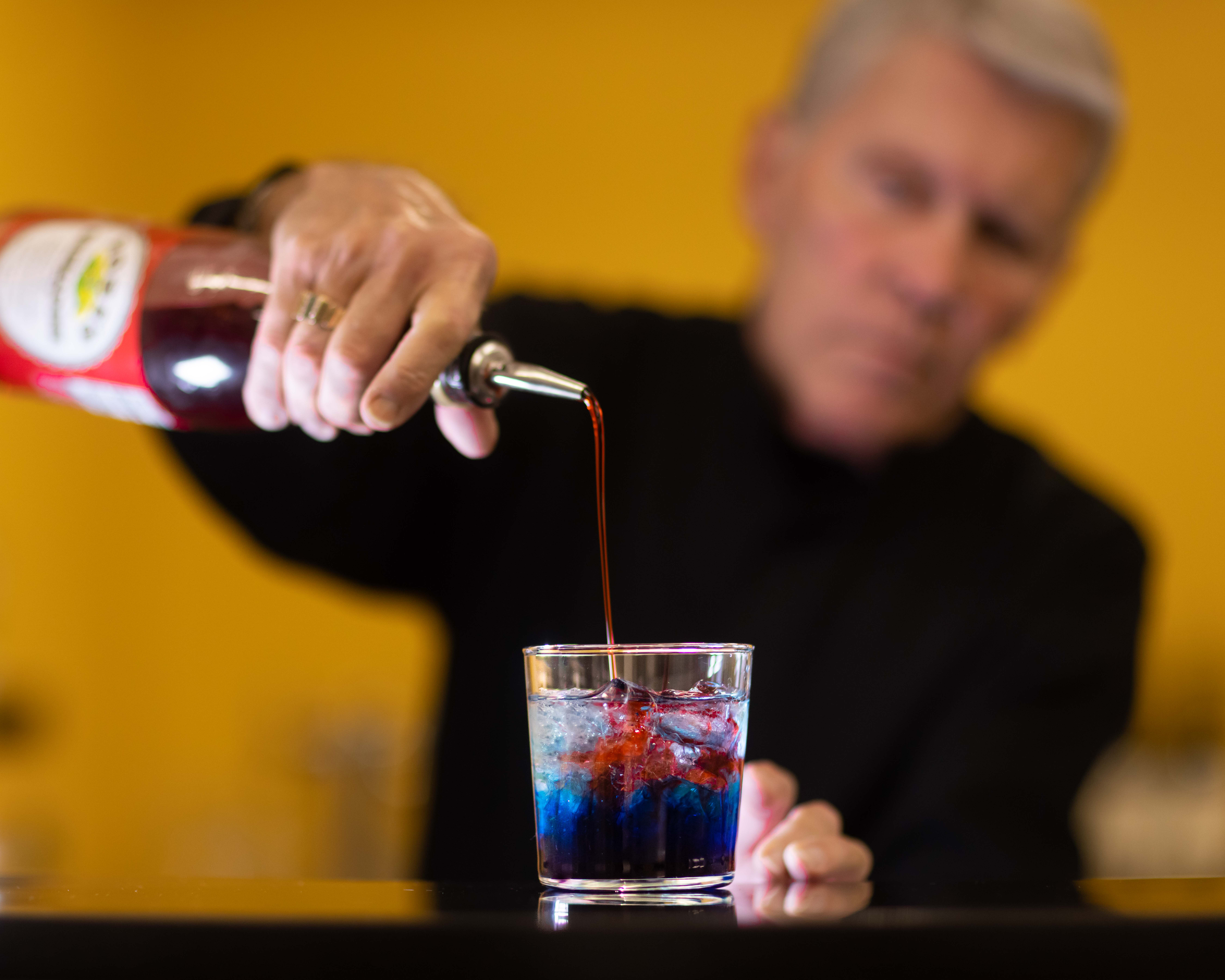 “From my Johnson & Wales mind and my scientific approach to cocktails, it was just too intricate,” he says. “It would work perfect at a country club…”

So, they whittled it down to just four ingredients for a tasty drink that still achieved the look he wanted.

Among the fourteen drinks he created, Logan says he has a couple of favorites. One is the bright green Midori liqueur-flavored concoction, “Pucker Up, Pucker Up, Pucker Up” created for Beetlejuice (available March 28 - April 2, 2023 at Belk Theater). 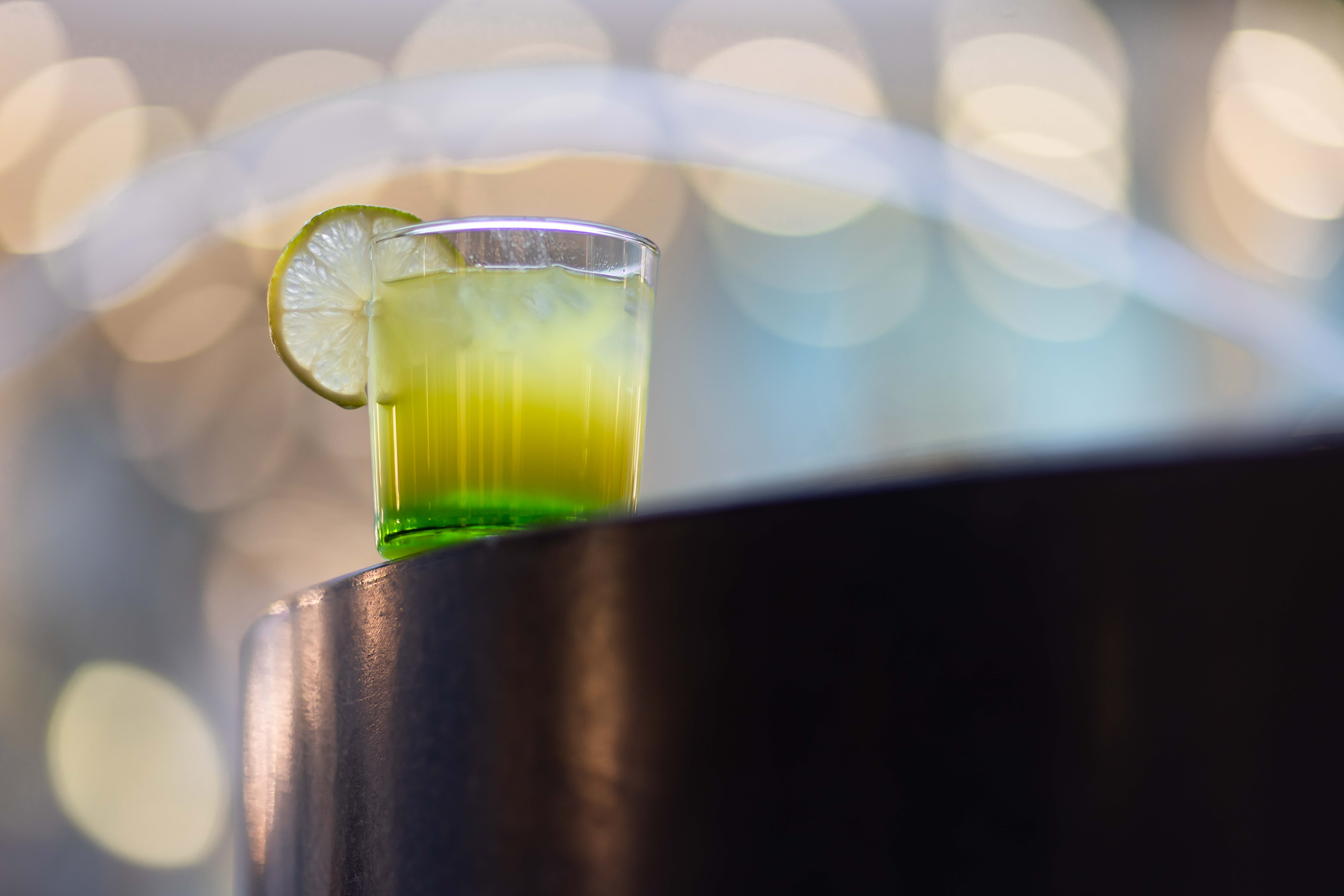 Another is “Out of Sight,” a Kahlua-flavored drink for the musical Ain't Too Proud (July 25 - 30, 2023 at Belk Theater). That one comes with a twist of nostalgia. Logan says when he was reading the show Ain’t Too Proud and learning about the characters, it brought back childhood memories of his parents on family vacations and gatherings at his grandmother’s house. That’s when the adults would be playing card games and listening to music by artists like Marvin Gaye and Stevie Wonder. It’s also when he’d catch his mom enjoying her all time favorite drink, a Black Russian.

“And when I was a kid, I would always see her make this drink and it would just look like coffee to me and I never understood: ‘why is my mom drinking coffee?’ And it just looked weird in a glass.”

So as he pondered what combo would work best for this show, he hit on a modified Black Russian, as the perfect choice. “An ode to my mother and [an] ode to the wonderful music that Broadway could do for you,” he says. “...From a memory standpoint, from an emotional standpoint, that’s my favorite drink by far.” (See below, for Logan’s recipe!)

TIPS FOR ENJOYING DRINKS AT THE THEATER

Logan offers theatergoers these two suggestions for making it a relaxed evening with plenty of time to enjoy your concessions.

→ If possible, come early to the theater so you’re not rushed to find your seat. Drinks and light snacks are available one hour before each show.

→ If you plan to have a drink at intermission, go ahead and pre-order it from the bar when you arrive at the theater. You’ll be able to save time and skip the line later. Simply present your drink ticket to the usher at the drink table near the bar, who will retrieve your order—freshly prepared about five minutes before intermission.

WANT TO TRY BARTENDING AT HOME?

Here’s Harold Logan’s recipe for “Out of Sight,” specially crafted for Ain’t Too Proud.

Fill a lowball glass with ice. Add vodka, then Kahlúa and finish with a club soda float (i.e., fill it to the top or to your taste). Serve with a straw for people to enjoy the fullness of each layer or to stir and mix up the flavors.

LOGAN’S TIPS FOR MAKING YOUR OWN DRINKS AT HOME 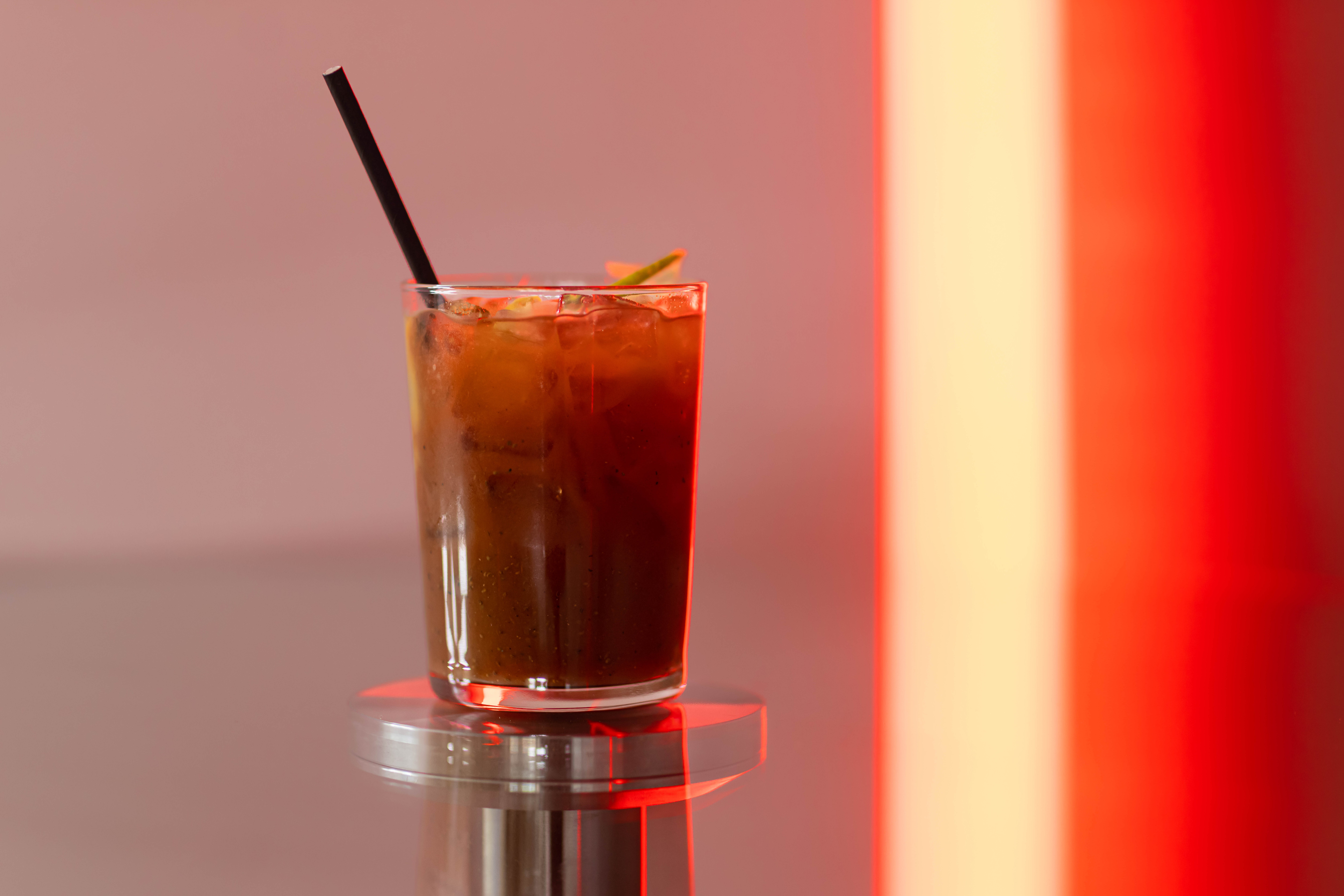