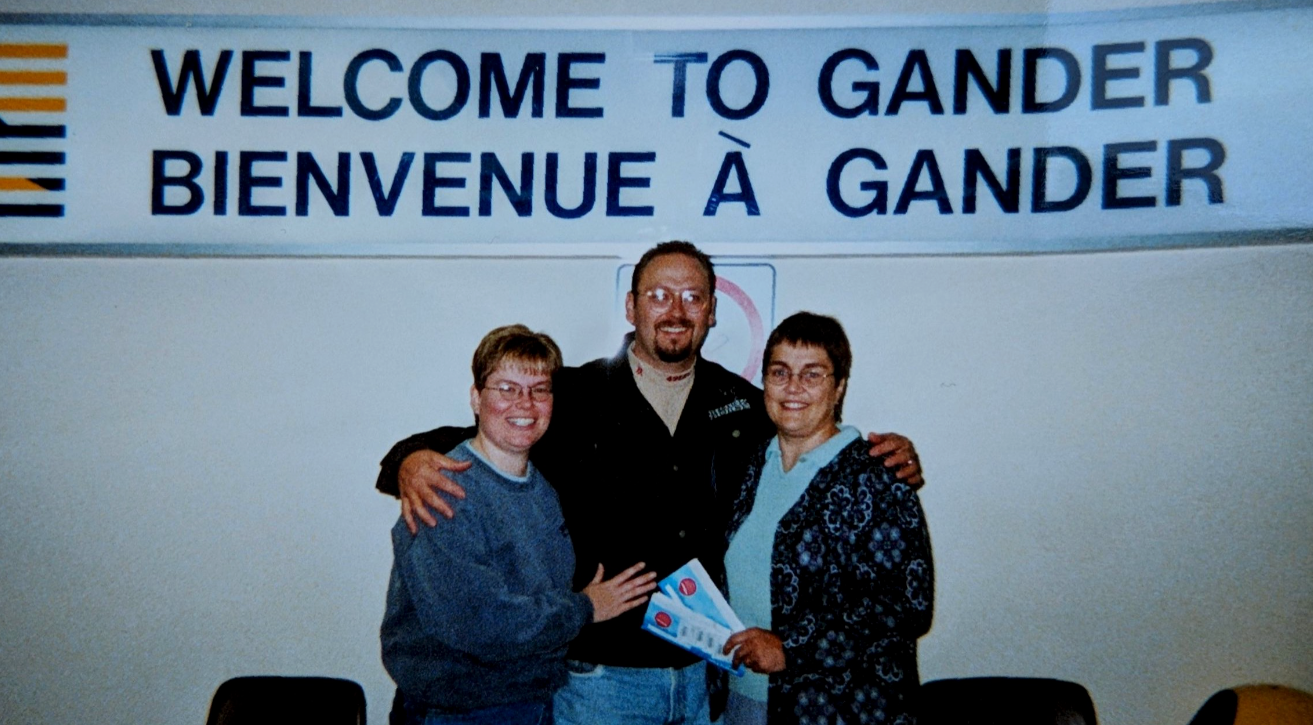 Home/News/Blog/LOCAL COUPLE WILL SEE THEIR OWN STORY BROUGHT…

LOCAL COUPLE WILL SEE THEIR OWN STORY BROUGHT TO LIFE IN BROADWAY MUSICAL, COME FROM AWAY

Phyllis and Jim Knubel haven’t yet seen the musical COME FROM AWAY, inspired by the incredible generosity of a small Canadian town during 9/11, but they already know the story by heart.

That’s because they lived it.

The Knubels, who retired a few years ago to York, SC, were aboard one of the 38 planes, carrying more than 6,500 passengers, diverted to Gander, Newfoundland when the terrorist attacks on 9/11 took place. The town’s population nearly doubled overnight and for the better part of a week, residents did all they could to support the physical, social and emotional needs of the “plane people.” 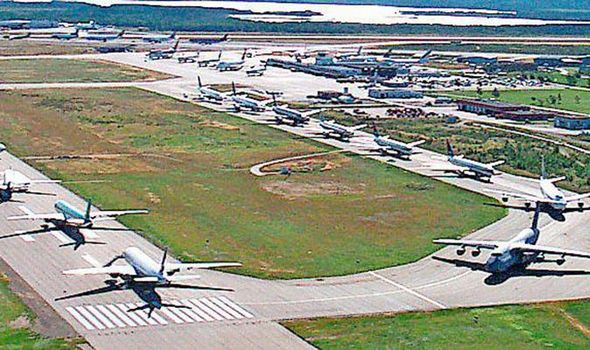 “When it opened on Broadway, we were in the process of moving [from Putnam Valley, NY to York] so we didn’t get to see it,” says Phyllis Knubel. “So I actually wrote to Blumenthal when we moved here. I said something like, ‘you have to bring it here.’”

When she learned that COME FROM AWAY would be coming to Belk Theater Jan 7 - 12, 2020, she called the box office before the show had even gone on sale to the public: “We [had] to get tickets to see this because it is exactly our story.”

What the Knubels experienced in Gander affected them deeply; the people they met showed profound kindness, empathy and selflessness. Some have also become treasured friends.

“It’s not something that my husband and I would ever forget,” says Knubel. “When we talk about it, we always cry. How from that disaster, people we didn’t know in another country could come together and take care of all those people.”

Here’s how their real-life experience unfolded, as told by Phyllis Knubel:

The couple was halfway across the Atlantic Ocean, returning from a dream vacation to Kenya and Amsterdam, when the pilot announced a change of plans. A problem at JFK Airport in New York would prevent them from landing, so the flight was being rerouted to Gander to refuel. He told them to expect an hour delay. 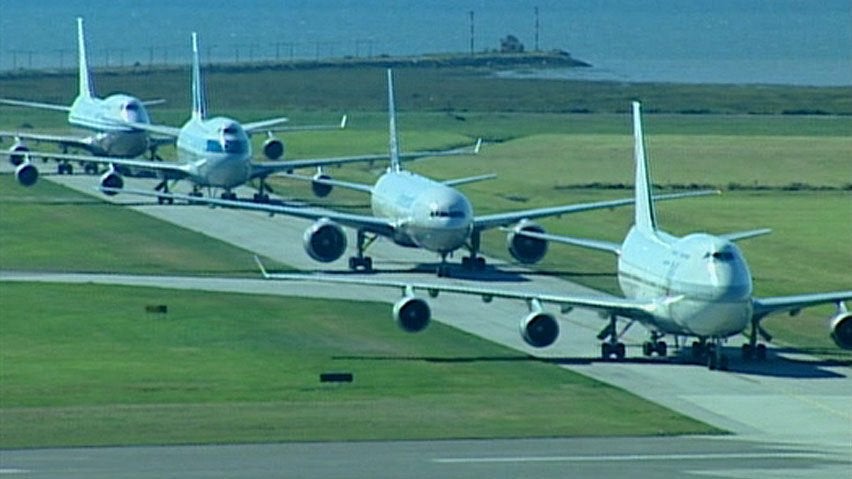 As they sat on the runway at Gander waiting, Knubel looked out the window and noticed other planes—tons of them—with international logos like Air France and Lufthansa all around them. Something didn’t seem right. She knew this wasn’t a major destination.

Eventually the pilot came back on with a terrifying update. “The United States is under attack,” he told them. It would be a while before they could go anywhere so he recommended everyone try to get some sleep.

“Yeah, right!” says Knubel, recalling how sleep was the furthest thing from her mind, as she and the other passengers of Northwest Flt #61 first learned that something was terribly wrong that Tuesday, September 11, 2001.

In all, they would spend 17 hours on the runway and four days stranded in Gander, discovering bit by bit what was taking place in the US and how the world was responding.

GETTING OFF THE PLANE

One at a time, the planes were eventually allowed to release their passengers into the airport for customs and security clearance. They could bring their carry-on bags but all other luggage had to be left behind. Knubel didn’t know it at the time but learned later that the Canadian government had taken a big risk by accepting these flights after two hijacked planes crashed into the World Trade Towers, another into the Pentagon and a fourth into a Pennsylvania field. Some feared other terrorists could be aboard these flights too.

It was dark outside when the Knubels emerged. Their plane was seventh on the runway so they were fortunate they could deplane that same day. Passengers on other flights waited through the night before they could finally get through the airport.

The Knubels saw right away that things were well organized on the ground: the Red Cross and The Salvation Army were set up at the airport, distributing food. Those, like Phyllis, who were in need of medication could meet with onsite doctors and nurses who made sure any necessary prescriptions would be filled and delivered the following day to each passenger. All of this was done free of charge. 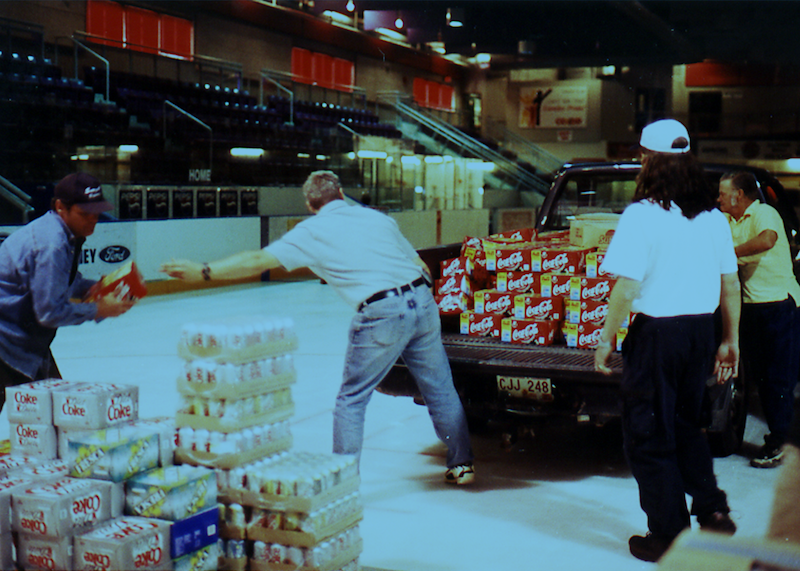 A COMMUNITY GOES ABOVE AND BEYOND

As they exited the airport, a remarkable sight awaited them. School buses were lined up, ready to transport stranded passengers to assigned destinations around town, including schools, community centers, firehouses and churches—each having volunteered to become a makeshift shelter.

The scene was even more extraordinary because the school bus drivers were in the midst of a strike. “They all came off strike to pick up these people who were inundating their small town,” says Knubel.

When the Knubels arrived at Lakewood Academy in the neighboring town of Glenwood, the school had already been transformed to accommodate 500 or so of the plane people with a working cafeteria, showers, floor space to sleep, and other basic necessities. 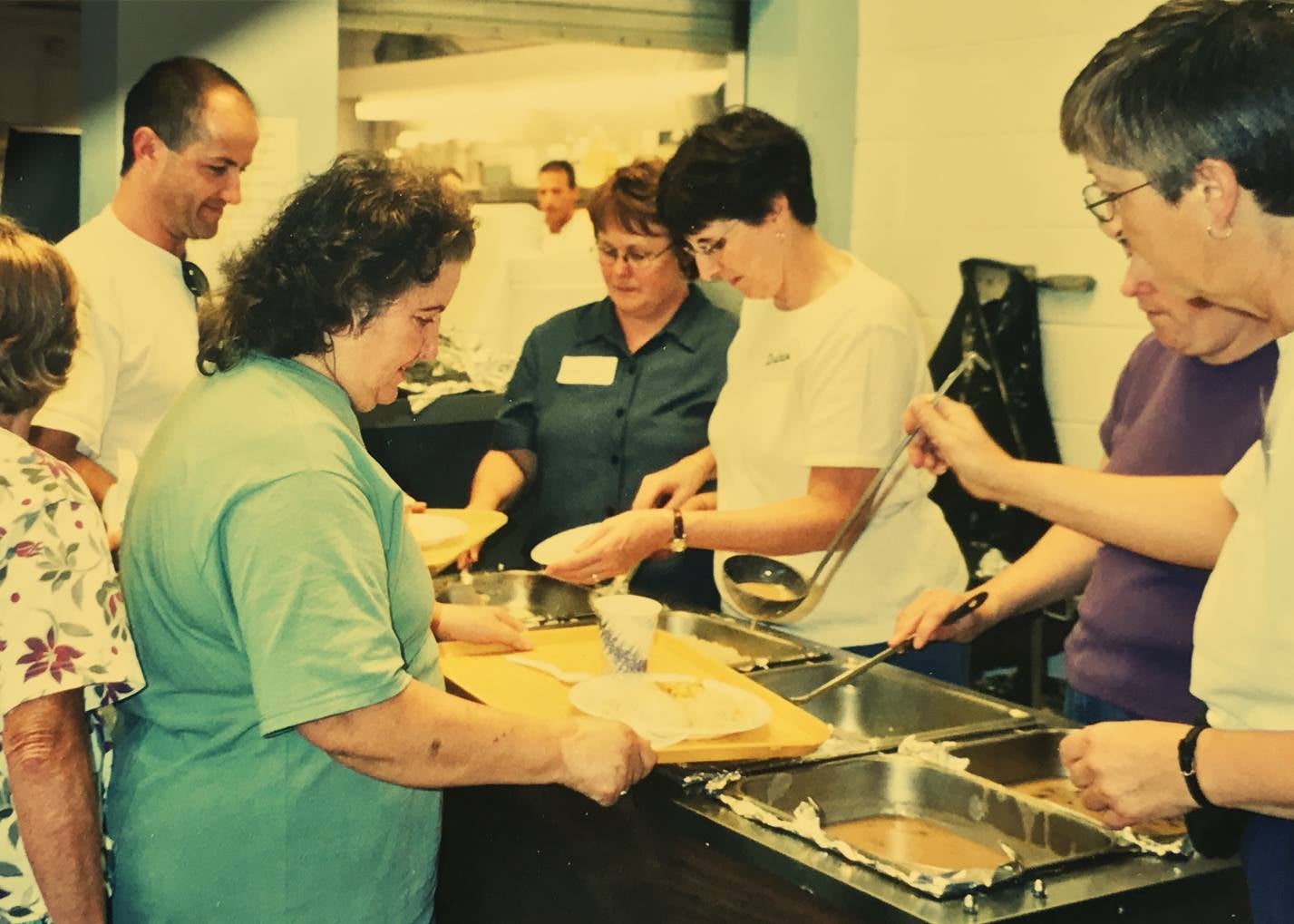 “People who live in the area were bringing blankets and pillows—everything you think of from their home,” says Knubel. “They just grabbed their stuff and came to help at these refugee areas.” 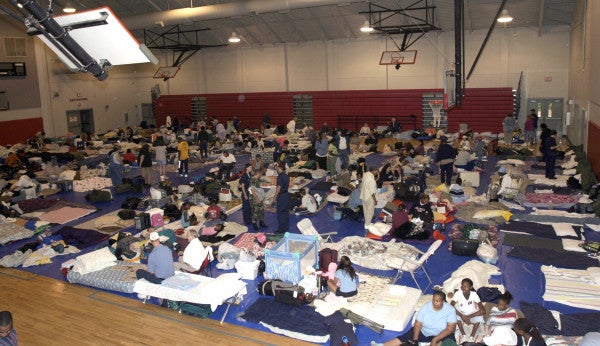 The government opened up phone lines so the stranded passengers could make free five minute calls to anywhere in the world.  “I thought that was awesome because nobody knew where we were,” says Knubel, recalling how they managed to get word out to family and friends: “Jim said, 'when the chips are down, call your secretary.'” His assistant at the New York Power Authority took care of reaching everyone on their list.

A TV installed in the school’s computer lab enabled passengers finally to see on September 12 the shocking events that had taken place the prior day. Knubel says it was hard to wrap their minds around it, like watching a horror movie. And with people from more than 50 countries in their midst, there was a great deal of confusion and a constant need for translators.

“There were a lot of people who didn’t speak English who really didn’t know what was happening immediately,” says Knubel. 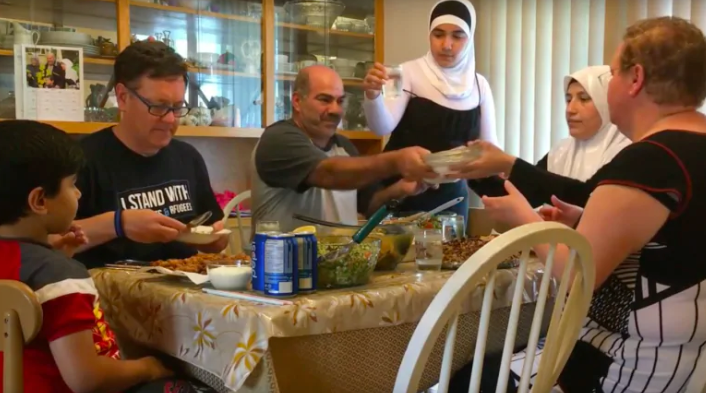 Later on the morning of the 12th, while they were having tea and a bite to eat, a young woman came into the cafeteria, offering to take two people home with her so that they could rest in a more comfortable setting. The Salvation Army rep suggested taking the Knubels—noting that Phyllis, who was in need of a hip replacement at the time, could likely use the reprieve. Indeed, she had been agonizing over how she was going to sleep on the floor.

The Knubels went home with the woman, Carole Findlay. They took showers and Findlay made them lunch. Several hours passed before Gordon Head walked in and the couple learned that Findlay was actually a friend of the owners, also stranded in town. She had invited the Knubels to come back to their house without their knowledge. Findlay was sure her friends wouldn’t mind.

She was right. Gordon and his partner, Allison, opened their home to the Knubels, setting them up in a spare bedroom. They took them around and helped them get new clothes, and they offered emotional support and friendship in a time of tremendous need. “They were unbelievable,”  says Knubel.

They discovered things they had in common (like Jim and Gordon’s shared love of hunting and fishing) as well as differences.

“We talked about everything. We played some games like, if you could travel anywhere in the world, where would you like to go?”

The Knubels were returning from Kenya, the place Phyllis had always wanted to go, but Gordon had never been out of his Canadian province. He dreamed of visiting New York someday.

Four days later, the Knubels were on their way back to the U.S., grateful and transformed by their experience.

“I think it has changed our outlook on humanity that in spite [of] what we hear every day and read on social media, there are more good people in the world than we can imagine,” says Knubel. “And I think that the people in that area could not do enough to be sure that we were taken care of. And they asked for nothing in return. People tried—[the locals] wouldn’t take anything. Even in the stores for food.” 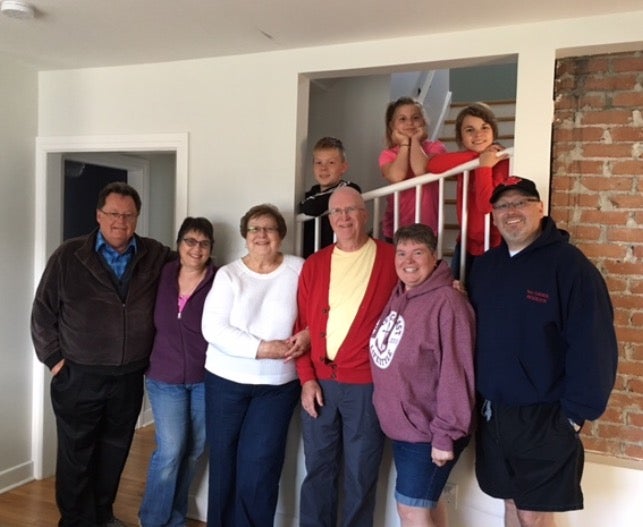 Several months later, however, the Knubels finally had a chance to express their gratitude. They received a letter from Gordon and Allison announcing their engagement and inviting their new friends to a wedding celebration. The Knubels, while unable to make the ceremony, knew just what they wanted to do to mark the occasion:

“We remembered that Gordon wanted to come to New York,” says Knubel. “For their wedding gift, we sent them two tickets to New York. They came to stay with us and we took them all over.”

The newly married couple received a hero's welcome. The mayor of Putnam Valley brought them a plaque, to thank the people of Gander for all they had done, and they visited Ground Zero with a state police escort. The officer who took them around had also been stuck in Gander during 9/11. (He had stayed with Gordon’s uncle!) At Ground Zero, the Heads presented a banner made by the children of the Lakewood Academy with a message of enduring friendship.

These bonds built in 2001 still run strong and the friends have held periodic reunions since then. “We have kept in touch all this time,” says Knubel. 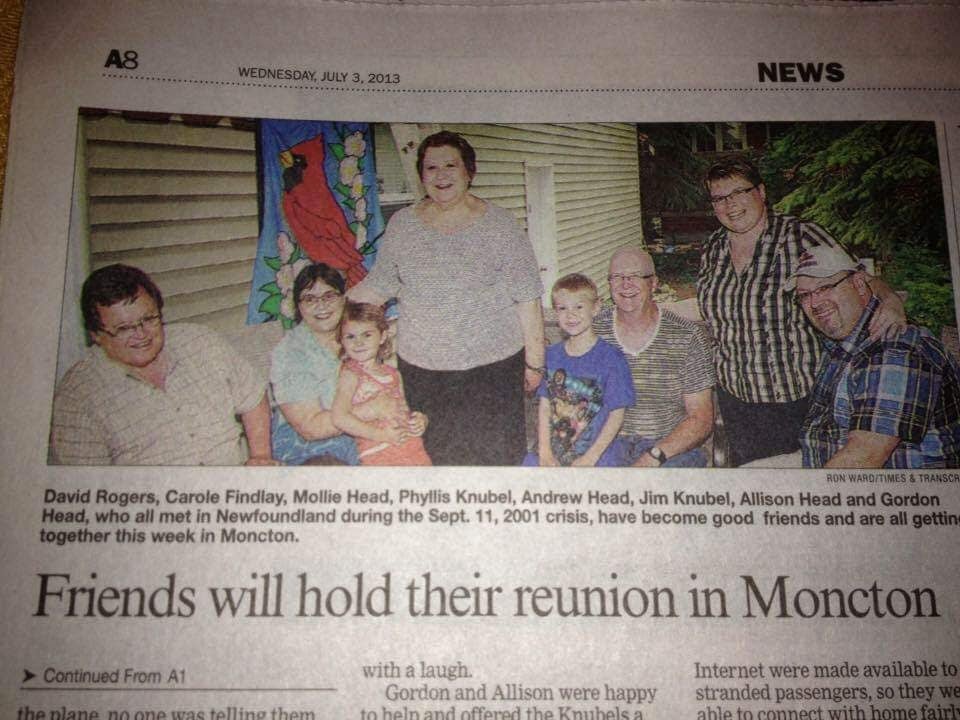 In January, the Knubels will get another chance to reminisce as audience members of COME FROM AWAY. “Everyone who has seen it, mostly in New York, has said it is absolutely wonderful,” says Knubel. “...I’m really looking forward to our night [and] reliving it again.” 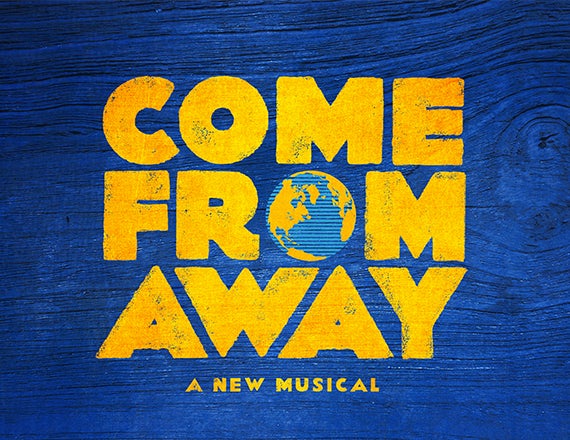 Come From Away
Get Tickets