Home/News/Blog/Meet Angela Harris— one of our “Sew…

Meet Angela Harris— one of our “Sew for the Show” Judges

Give Angela Harris and her family a theater challenge and the odds are good they can find a solution. Harris, a local costumer, is one of the judges for Blumenthal’s “Sew for the Show” Mask Contest. (Today, we’re sharing her expert level model mask for “Charlie and the Chocolate Factory,” part of next season’s exciting lineup of shows coming to Charlotte!) 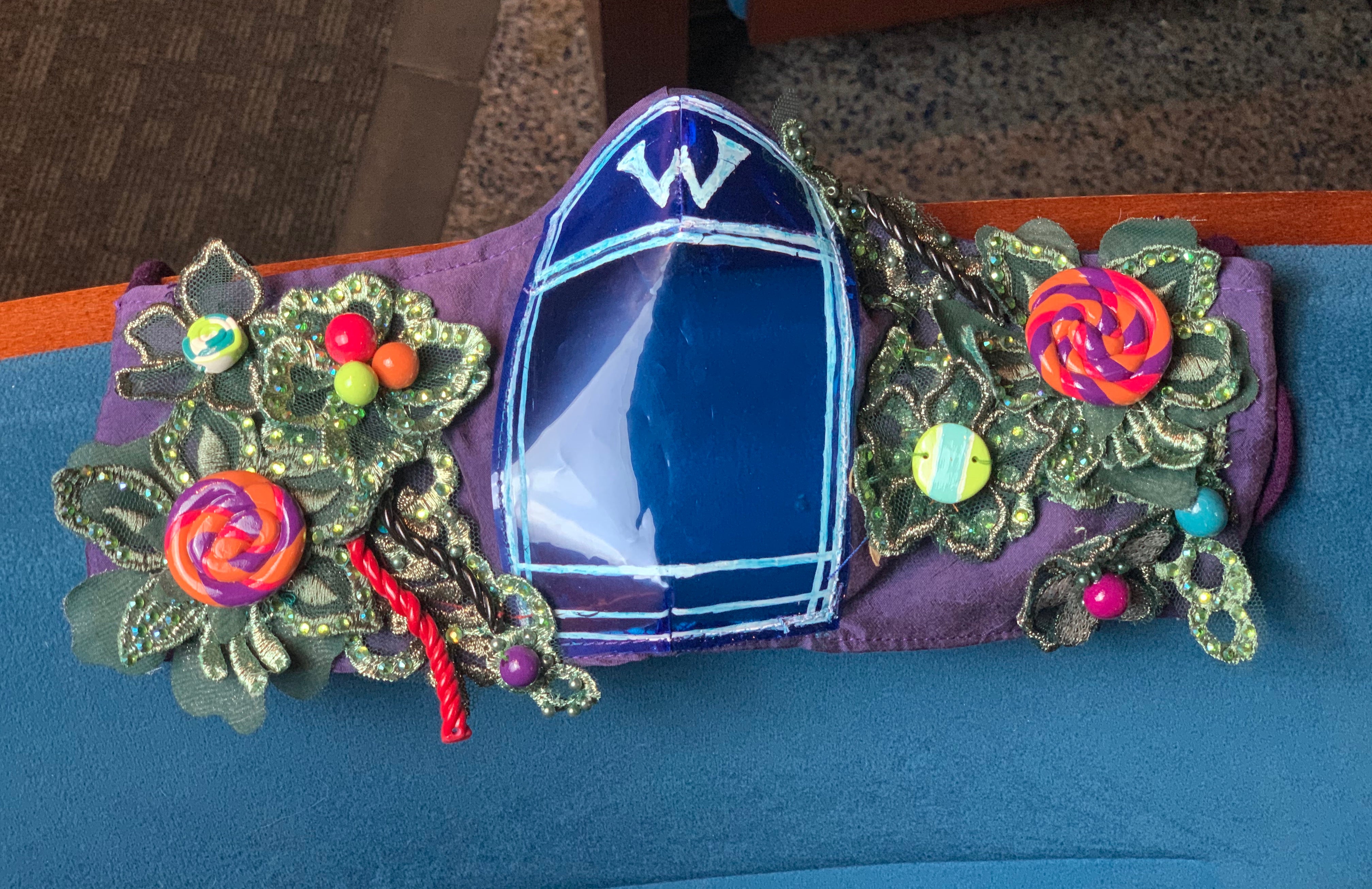 Her design career has taken her to all sorts of interesting places—from creating costumes for characters at the Carolina Renaissance Festival and designing for joust teams in the U.S. and abroad to managing the costume shop at Children’s Theatre of Charlotte and making wigs for Opera Carolina. She has also worked extensively with high schoolers, including some of her own kids, who have caught the theater bug. 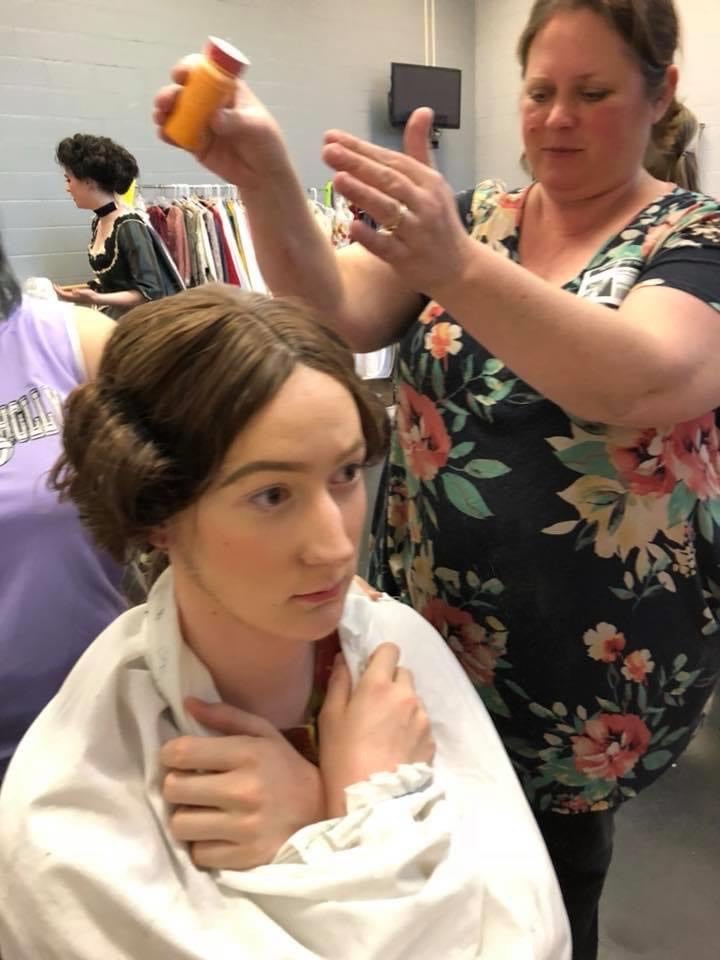 (Harris assisting with wigs for Stuart W. Cramer's production of Cinderella in 2018)

“I was very lucky over the years to work in places where my kids could be a part of creating art,” says Harris. “... That openness of the arts community in our area has made Charlotte a wonderful place for youth theater and theater education. I think it is one of our strengths.”

Since the COVID-19 pandemic hit, all four Harris kids have spent part of that time under the same roof again! There’s Emily, two-time Blumey Award winner for Best Costume Creation and a Mary Doctor Performing Arts Scholarship recipient, now a sophomore at UNC School of the Arts, studying costume design and technology. Check out the easy mask design tutorial she and her mom created for “Sew for the Show!"

Her older sister, Annalise, is a junior at Furman University, where she works in the costume shop, and studies political science and international affairs. Earlier this spring, she was interning in Brussels for IETM-International Network for Contemporary Performing Arts and has continued to work for them remotely during the crisis, helping to lobby governments and other organizations to support international artists and arts organizations.

Their brother Dalton, a high school senior at Highland School of Technology, is an engineering wiz who sometimes helps build sets and can fix almost anything.

Finally, there is the youngest, Amy, a junior at Stuart W. Cramer High School, who loves performing and is spending the quarantine working on dance, vocals and learning fight skills. (She’s also got some mad wig designing and styling skills that she’s shown off in various recent school productions.) 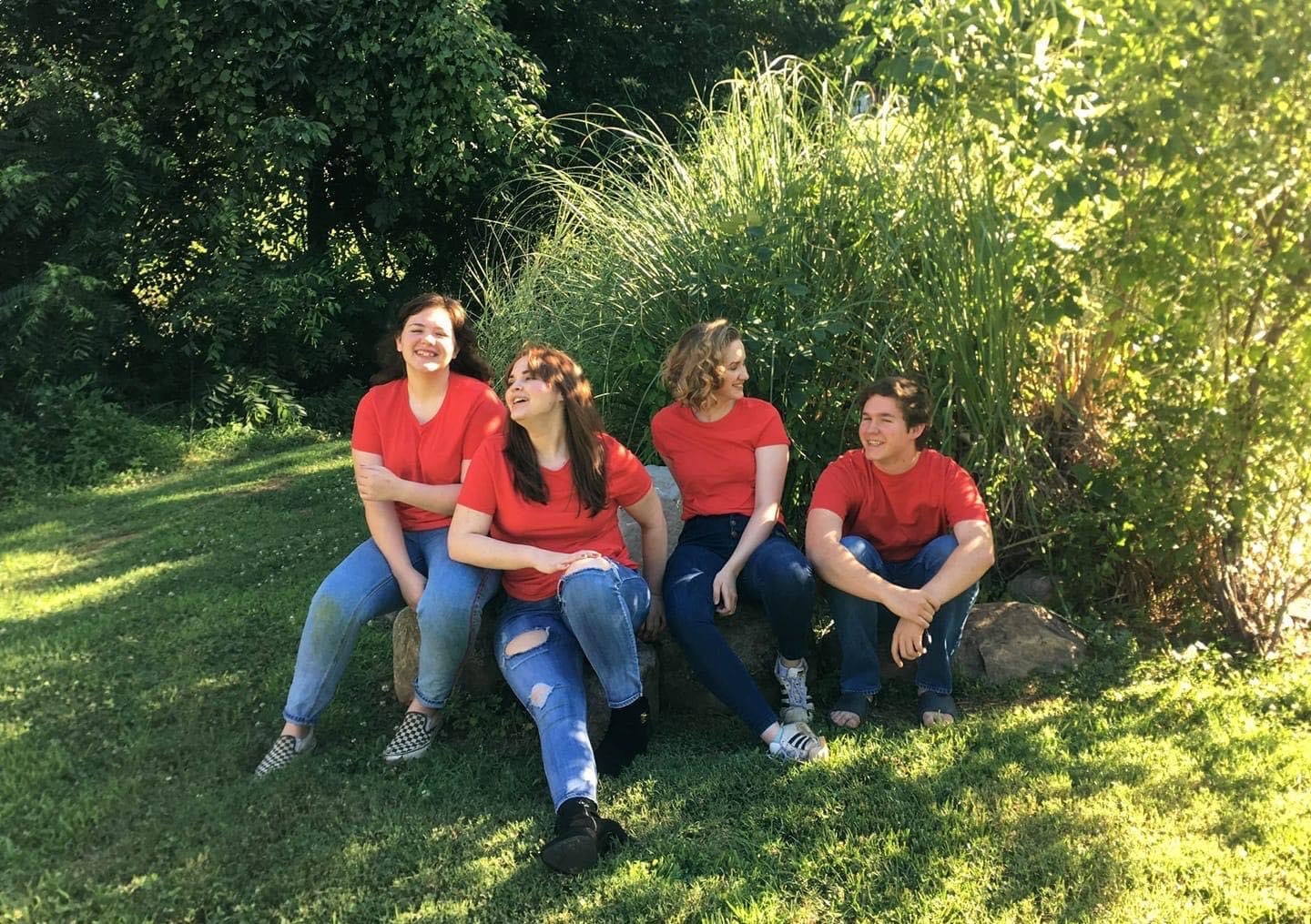 They’ve all been at home competing for Wi-Fi signals since Harris herself is a student again too, working toward a degree in history and a minor in theater at Belmont Abbey College. (Her husband, a plumber, is the only family member not at all involved in theater.)

“My house really does resemble an odd reality show at times,” says Harris, who sometimes catches her kids performing impromptu musicals in the dining room.

Here’s more about how Angela Harris got her start in the biz, the story behind her own “Sew for the Show” mask creation, and advice to anyone just starting out with sewing or costume design. (Minor edits for length and clarity.)

Q: How did you first learn to sew?

AH: I first learned to sew from my grandmother. She used to make my dresses and was an amazing seamstress. She started teaching me when I was three and I made my first piece when I was five for my Kindergarten Thanksgiving costume. In elementary school, I started modeling for a fashion designer in LA and she taught me about design. I would sketch for fun. 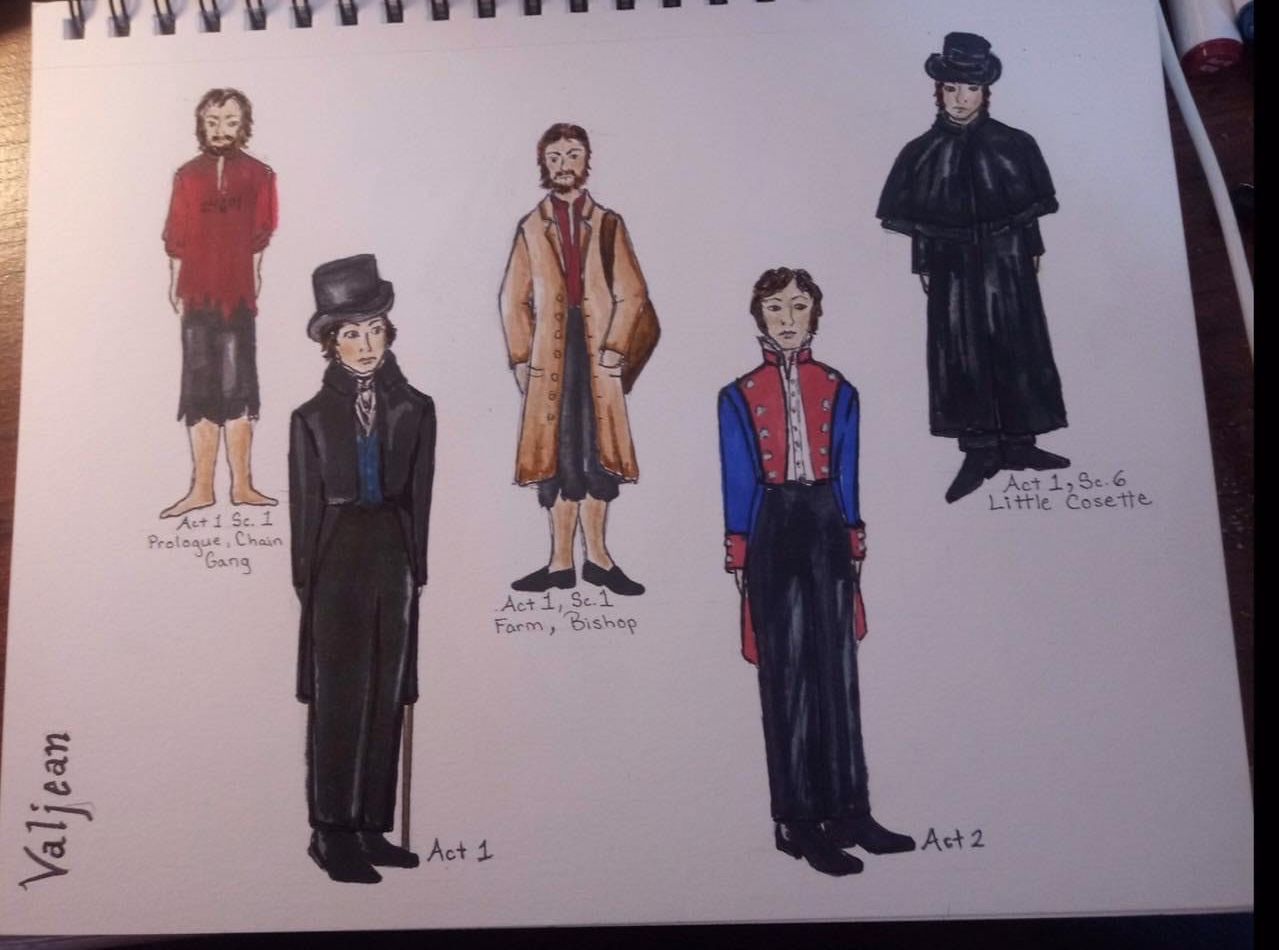 (Harris' sketched for costumes for Stuart W. Cramer's 2020 production of Les Misérables, that was cancelled due to Covid-19)

Q: How long have you been a costume designer?

AH: I started designing costumes in high school. I was a performer and wanted to go into musical theater. We needed costumes and I knew how to sew. From there I did a lot of freelance design work, dance schools, pageant costumes, theater, whatever I could do to pay the bills and be a stay at home mom.

AH: I love the process. It's collaborating with directors, the design team and performers to bring a vision to life and tell a story. I love the research, designing the costumes, the process of creating pieces. I also love when we have a challenge to figure out.

For instance, the fairy godmother and Cinderella's transformation dresses in "Cinderella." Emily, who joined me in the mask challenge, and I watched countless videos of everything from high school shows to the Broadway show and brainstormed ways we could make the transition happen seamlessly. [Emily was Head Costume Designer for the production.] We looked at it like engineers and went through some trial and error … Opening night I had several people tell me they blinked and there was a different dress. It was magical! Seeing the fairy godmother transformation on the Belk stage at the 2018 Blumeys was a great moment for both of us because there were a lot of blood, sweat, tears and sleepless nights in trying to get that transformation right!

Q: Can you tell me about your design for “Charlie and the Chocolate Factory?” (Did you use the same construction method that you demonstrated in the tutorial?)

AH: Emily and I started by watching different renditions of the story and pulling up images of the set and costumes from the Broadway show. We asked the question, "What would Willy Wonka wear?" We also talked about what our favorite elements of the story were. One element was the idea of a candy themed landscape. I have always loved the glass elevator and as I've gotten older I loved the way the glass elevator defies all the rules and flies out of the factory. "Charlie and the Great Glass Elevator" was one of my favorite stories when I was a kid (of course second to "Charlie and the Chocolate Factory"). So we used colors that would coordinate with Willy Wonka's costume and added a candy garden. (Emily made all the candies and I sewed the mask and decorations.) 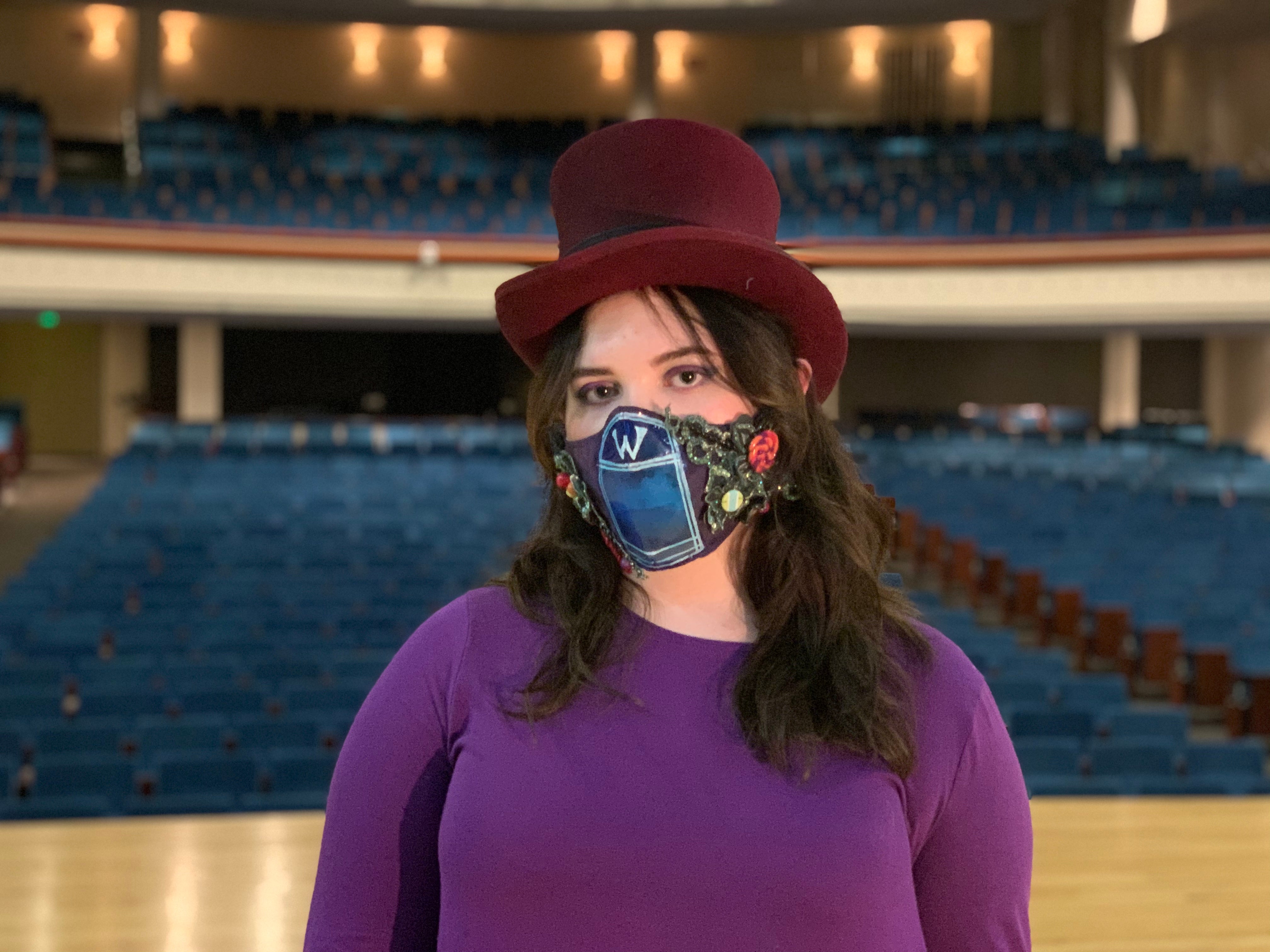 I wanted to incorporate the glass elevator but couldn't figure out how until a friend asked me about making some masks for her granddaughter who works with the hearing impaired. It gave me the idea of using the glass elevator in the same way we make the clear front face masks. I also am a firm believer that the arts should be inclusive and appreciate when theaters make the effort to include those with special needs like the hearing impaired or children with sensory issues, etc. 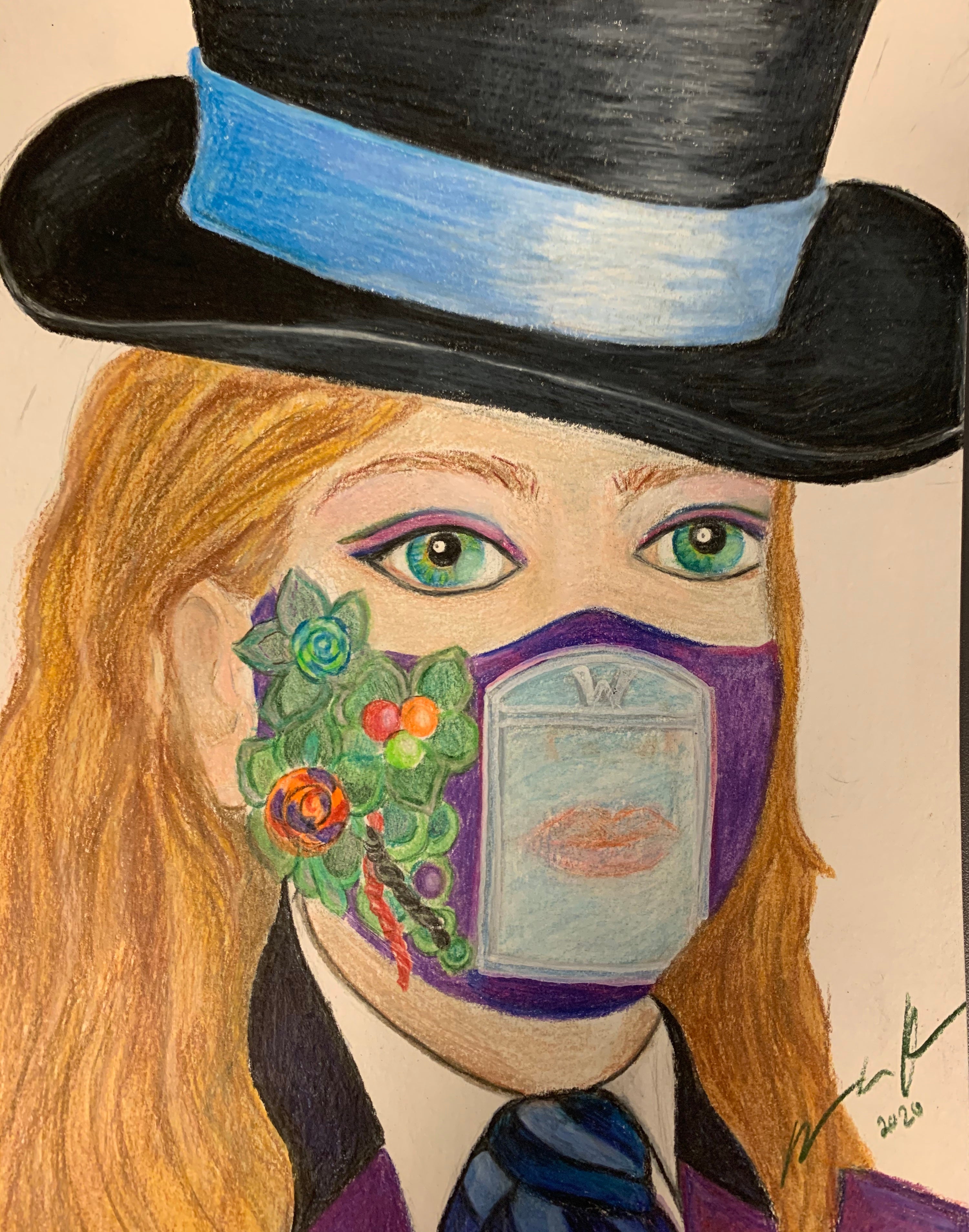 As to the tutorial, ours was the “in a bind no sew version.” It's a quick way to make a simple face covering for those who need a mask and have no sewing skills. For the show mask we used the pattern that I use for most of my masks. It is dome shaped without pleating, which is easier to decorate and also allows for the clear window in the front. 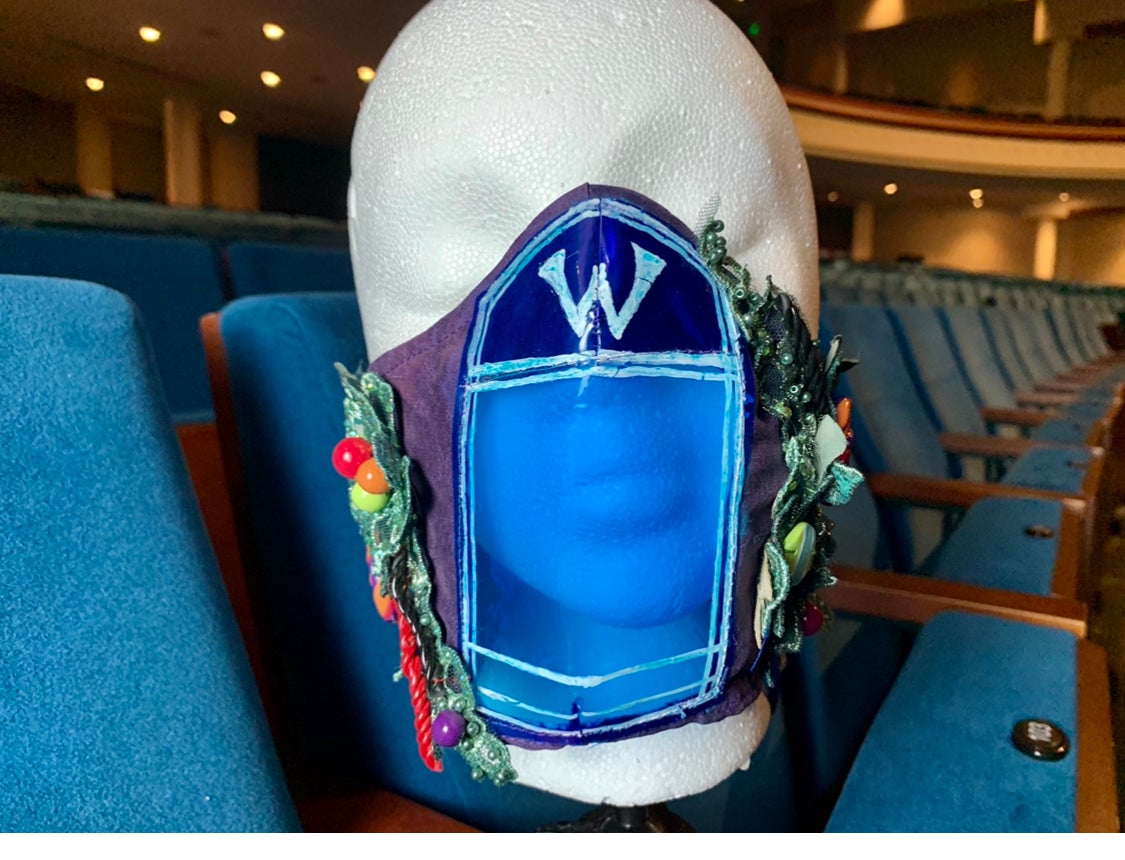 Q: What will you be looking for as you judge the designs submitted for this contest?

AH: I will be looking for creativity first and foremost. I also hope that families will work together. When I was asked to participate I asked if my daughter could work with me on the mask video and creating the show themed mask. It was so much fun to work together on this! It's a great way to spend some time together as a family while we can't go see shows as a family.

Q: What advice would you give someone who is new to sewing or interested in learning more about costume design?

AH: Get involved with your local theater. They are always needing volunteers and it's a great way to learn the ropes. Some of the best designers I know design for their community theaters as a hobby and it will give you a chance to learn if you want to pursue it as a career. If you want to costume in film or on a higher level, most places want you to have at least a bachelor's degree in theater with a costume concentration. Do your research into schools that offer programs and look at what their alumni are doing in the field. 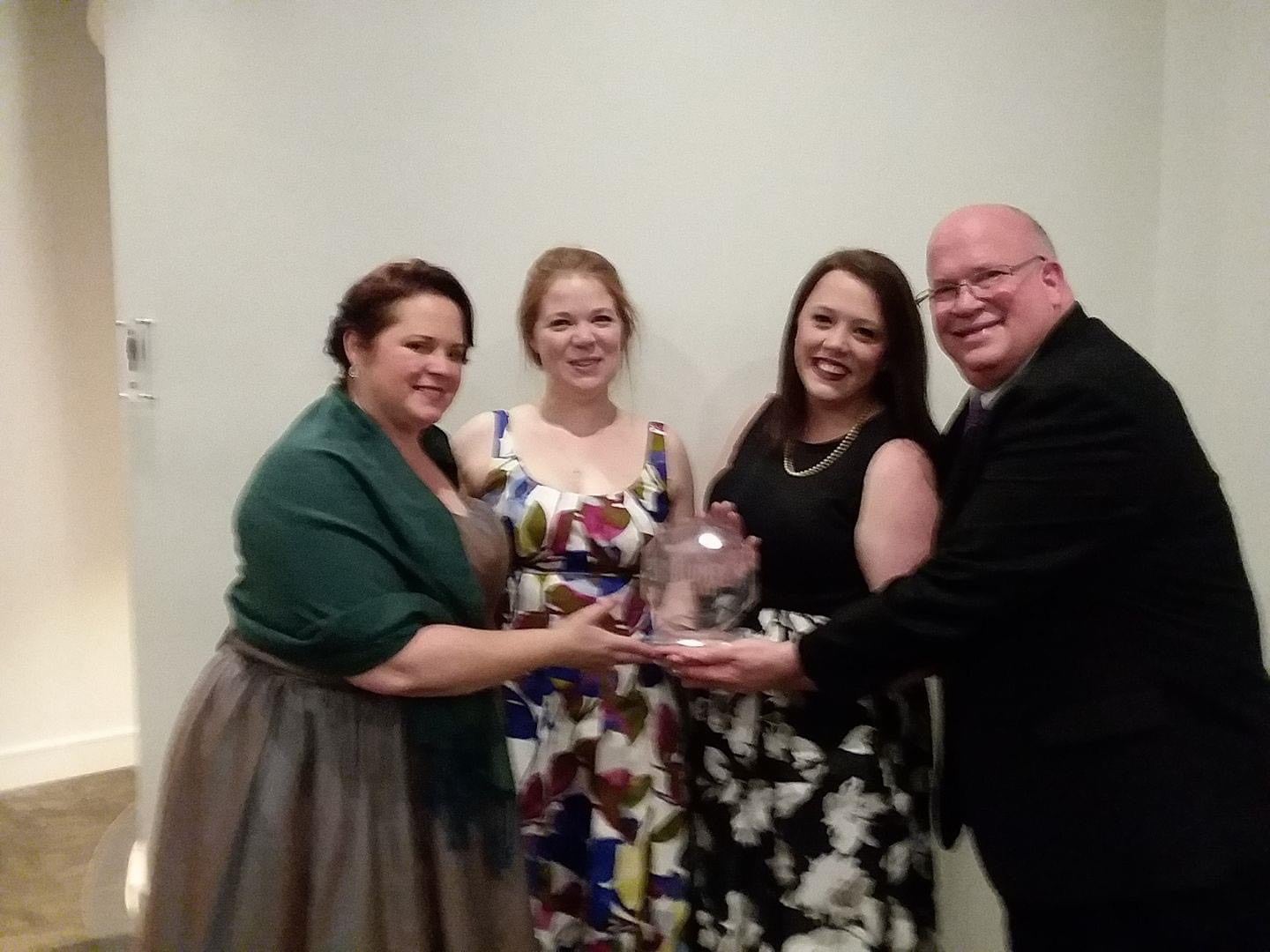 It is not an easy career, there are a lot of long hours and the pay isn't great. Emily spent years saying she'd never go into costuming because she saw how hard the industry can be. Then she was invited to the William Ivey Long event in spring 2018 at the Belk and over the course of the weekend realized that she had a passion for costuming and didn't want to do anything else even if it meant a lot of sacrifices. (We blame Blumenthal for her decision to pursue costuming instead of nursing!)