Amazing! During three weeks of competition, Blumenthal Performing Arts received nearly 275 submissions for the Sew for the Show Mask Design Challenge. (Way to go contestants—your creations were scrumdiddlyumptious, so fetch, and some of them even defied gravity!)

Each week featured a different musical design challenge from a show coming to one of Blumenthal’s stages in the 2020-2021 season. The competition featured two categories—one for teens and adults and another for young designers, age 12 and under. The six winners, selected by our panel of professional costume designers, will each receive a pair of tickets to the opening night performance of the show featured in her design.

Now, these talented six are competing in a final showdown for the grand prize, tickets to all three shows—CHARLIE AND THE CHOCOLATE FACTORY, MEAN GIRLS and WICKED. We can’t wait to see what they come up with for their final design theme challenge: Bring Back Broadway! In the meantime, meet these talented artists and find out more about their winning designs.

Other Mask-making Experiences: She has been making masks since March and recently completed a batch of 130 for her school colleagues. 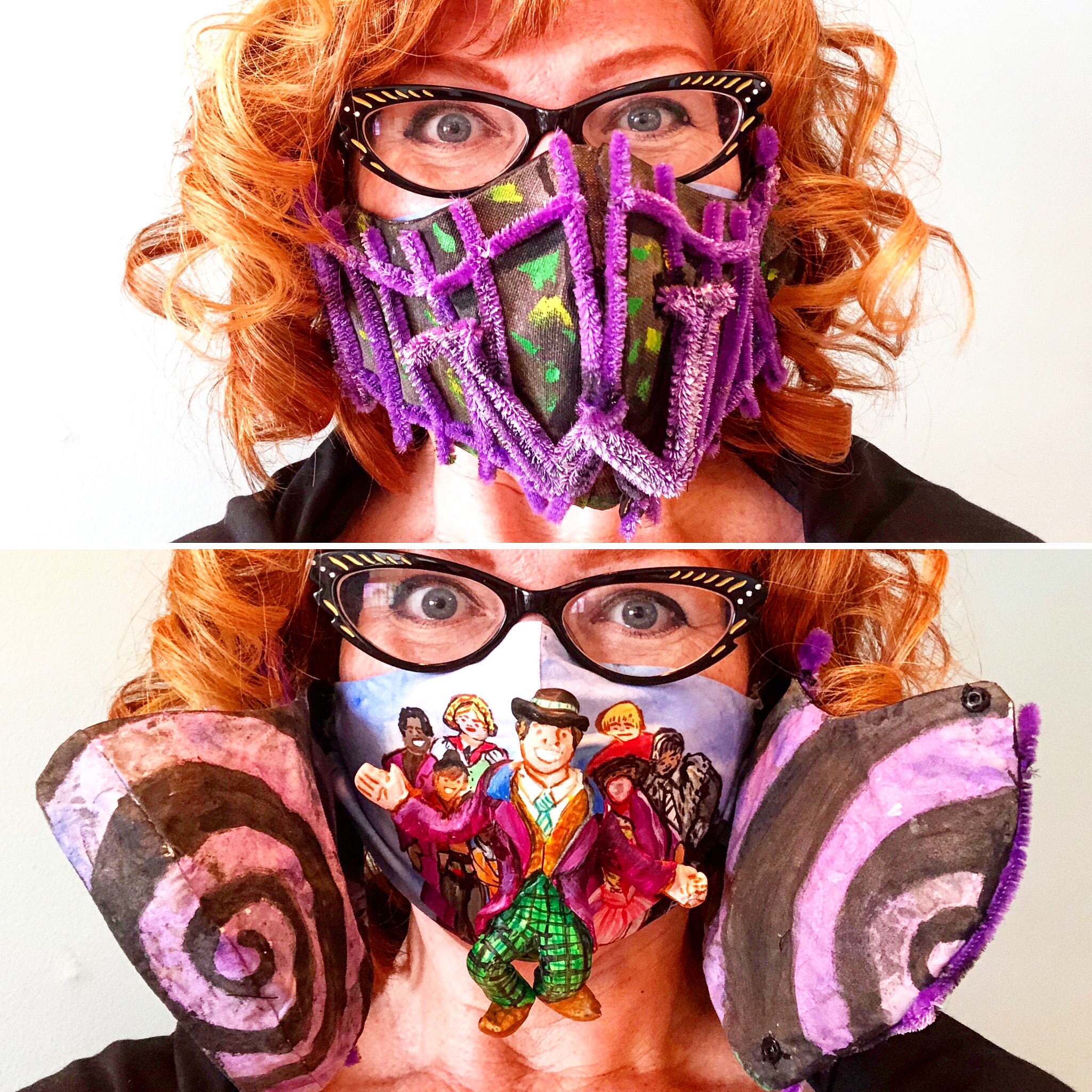 Cheryl Burchett had to think fast while planning her mask design in order to create the base and grab all of her supplies before hitting the road the next day for a family trip to the beach. “Once I left I wasn’t going to have a machine,” says Burchett, who spent the all-day Saturday drive putting the pieces together of her innovative design. Her design goal was to focus on an element of the show that would be iconic but original too. She struck Wonka gold when she realized the shape of the factory gates resembled the form of a face mask. And, of course, gates have to open up!

Burchett used canvas on the outside, with purple pipe cleaners forming the gates, and an interior made of quilted batik. When the gates open, you see Willy Wonka, formed out of Model Magic clay, surrounded by his adoring fans, hand-painted in acrylic. 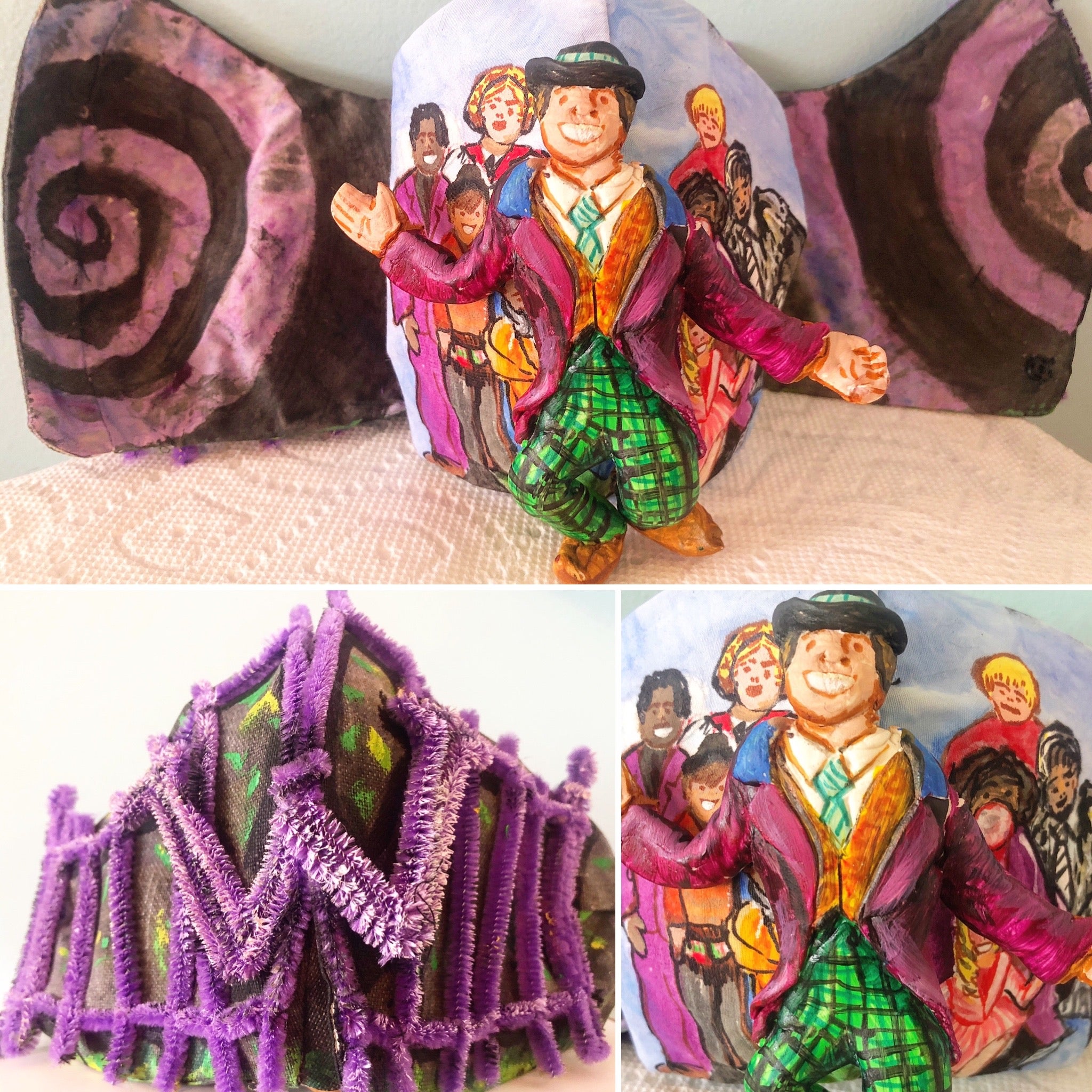 “I love theater and making things so this fit all the little targets for me,” says Burchett, who plans to make another roadtrip to see the show. This time it will be for a girl’s night with her 12-year old daughter (as they did when they came to see HAMILTON in Charlotte two years ago.)

Other Mask-making Experiences: This spring, Addie sewed and donated masks to Beds for Kids, a non-profit organization she visited with her class last year that helps families in need. 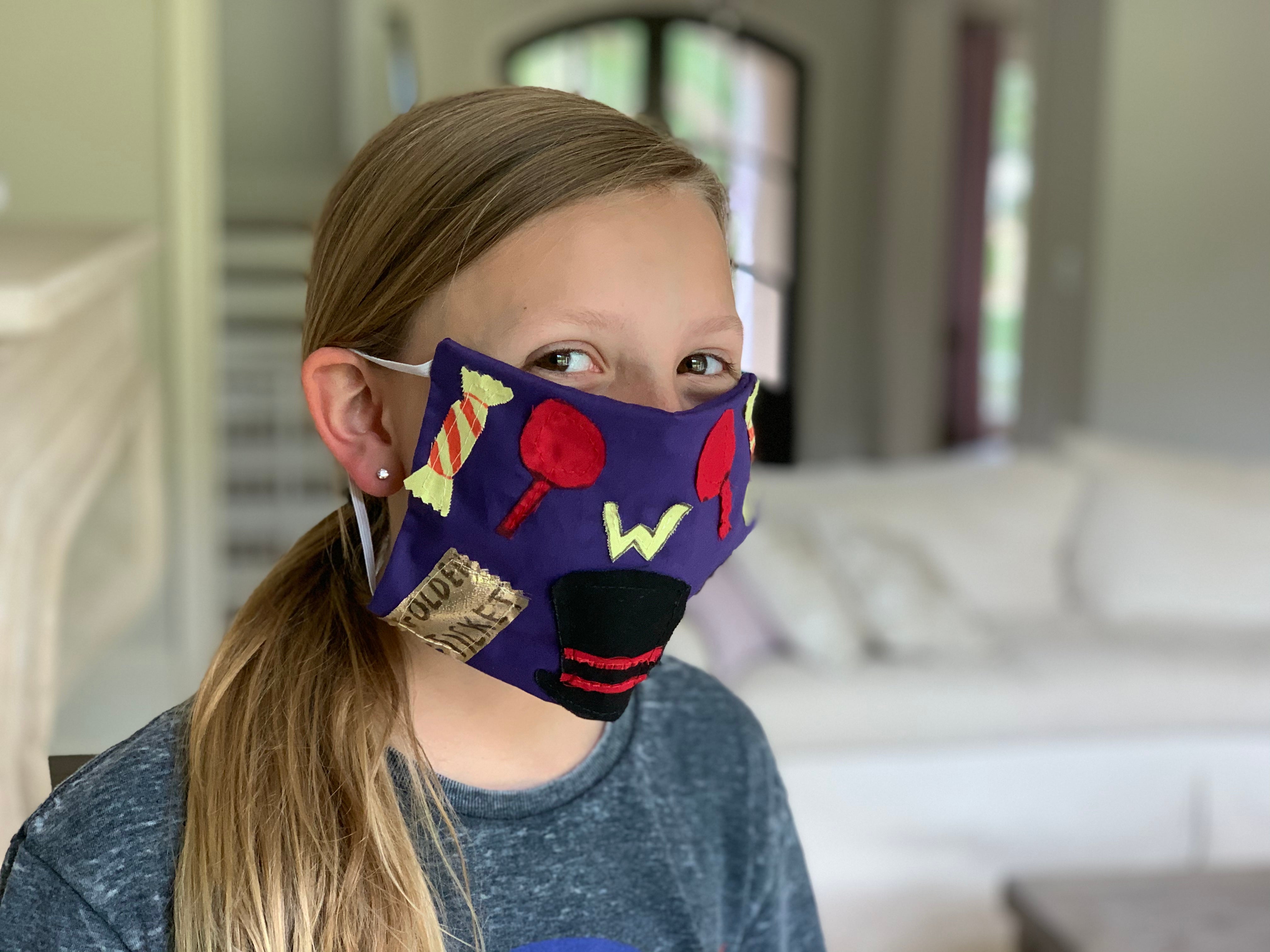 Ten year old Addie Lane received a sewing machine for her birthday two years ago but it has really been during the quarantine that her passion for sewing has taken off. After her best friend taught her how to use a pattern via Zoom, Addie started attempting more challenging projects, like sewing skirts and dresses. Her dad told her about the contest. “He knew I loved to sew … and I was really excited to enter,” says Addie.

It had been a few years since she’d seen the movie, however, so Addie’s first step was going online to research key images from both the stage production and the film. She sketched out her ideas and then went to the fabric store to choose materials to make a black hat, the golden tickets, and the candy in her mask design. Her biggest challenges, while putting it together, were sewing around the many small pieces with curves and figuring out a way to write on the golden tickets, which were made of a textured, wiry material. It took several attempts before she found a marker that would do the trick. 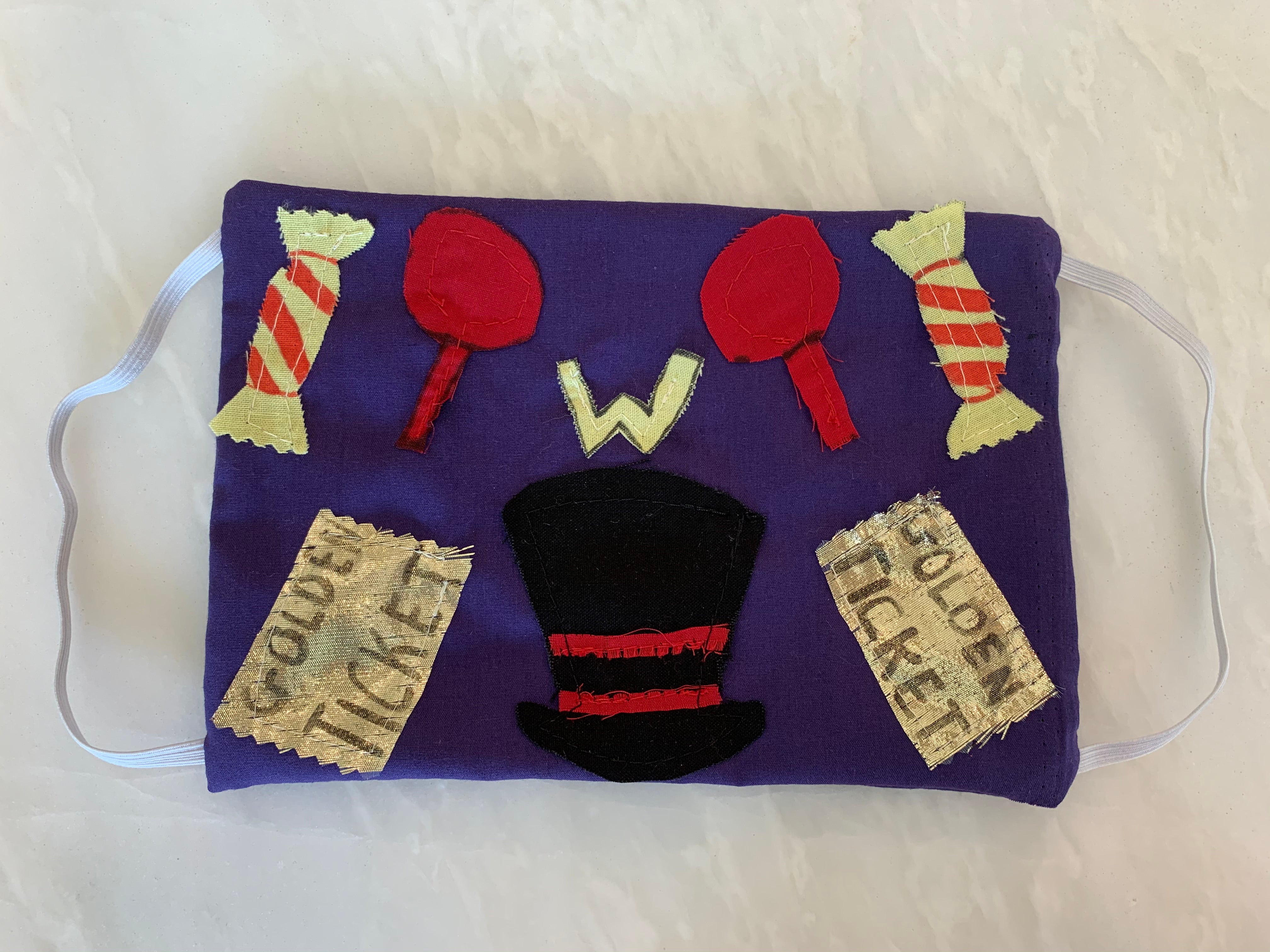 So, who will be joining her for CHARLIE? “I think I’m going to bring my dad, says Addie, “because he told me about the contest and he really likes going to see plays.”

Fun Fact: You might have caught her as Meg in CPCC’s PHANTOM OF THE OPERA or as Morticia in Theatre Charlotte’s THE ADDAMS FAMILY among other performances around the Queen City.

Other Mask-making Experiences: An avid cosplayer, this spring she used fabric scraps from her costume closet to make masks for many friends who work in the health field. 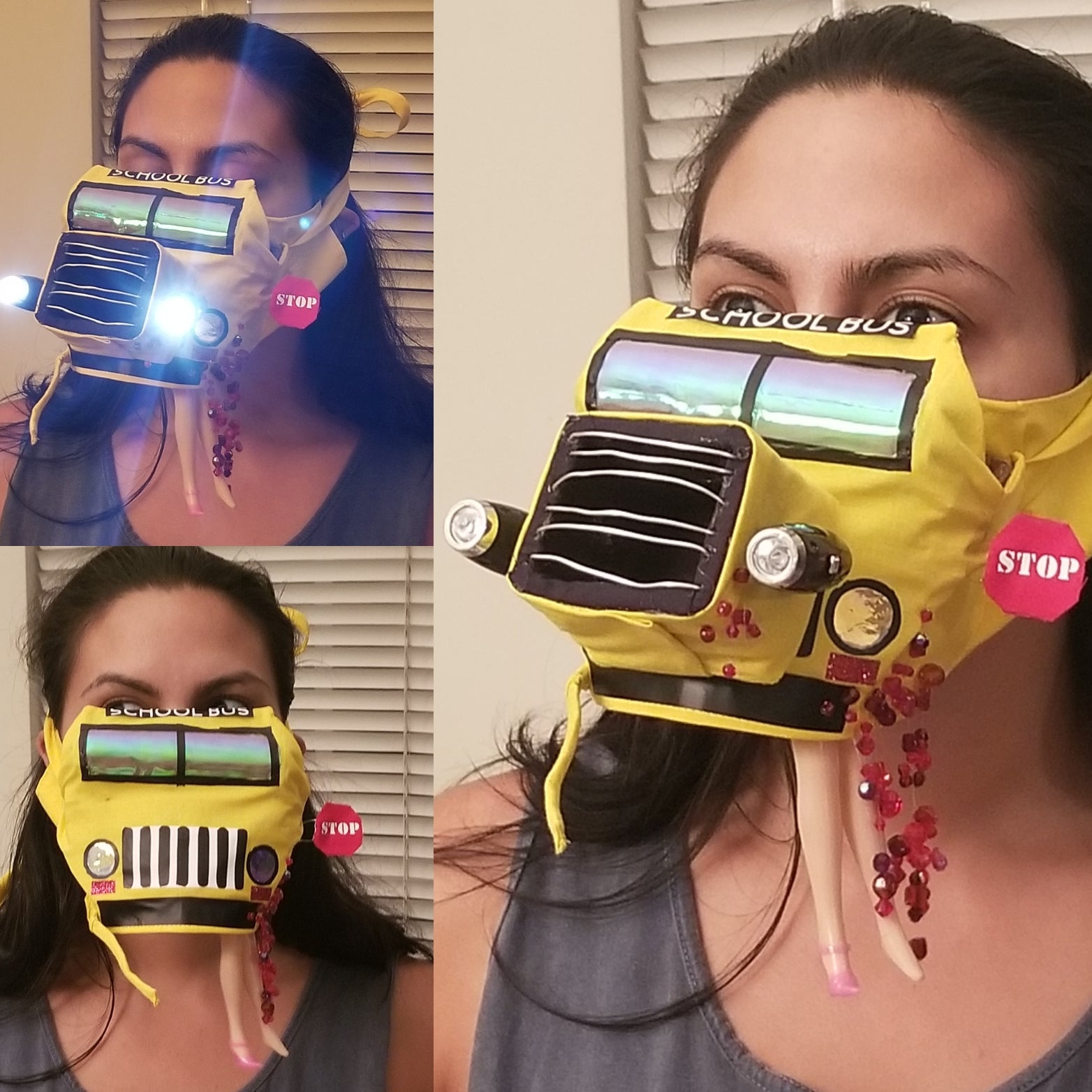 A 2016 graduate of UNC Charlotte, Aubrey Young learned to sew during a practicum course for her theater major. Young, who has performed in shows all over the Queen City as well as across the U.S., dreams of someday performing musical theater on Broadway. This summer she was supposed to be singing and dancing in a show at Carowinds. “Then Covid hit and that didn’t happen,” says Young.

It’s been hard not being able to perform this summer. When Blumenthal announced the competition, she knew this was the perfect opportunity to put some of her creative skills to use. “This gives me a reason to do something really out of the box, functional in a way, but really fun and ridiculous,” says Young, whose design featured a 3D yellow school bus with working headlights and the legs of MEAN GIRL Regina George sticking out in a nod to an iconic scene from the show. For a final touch of the macabre, Young hand-beaded red crystal beads to represent blood. 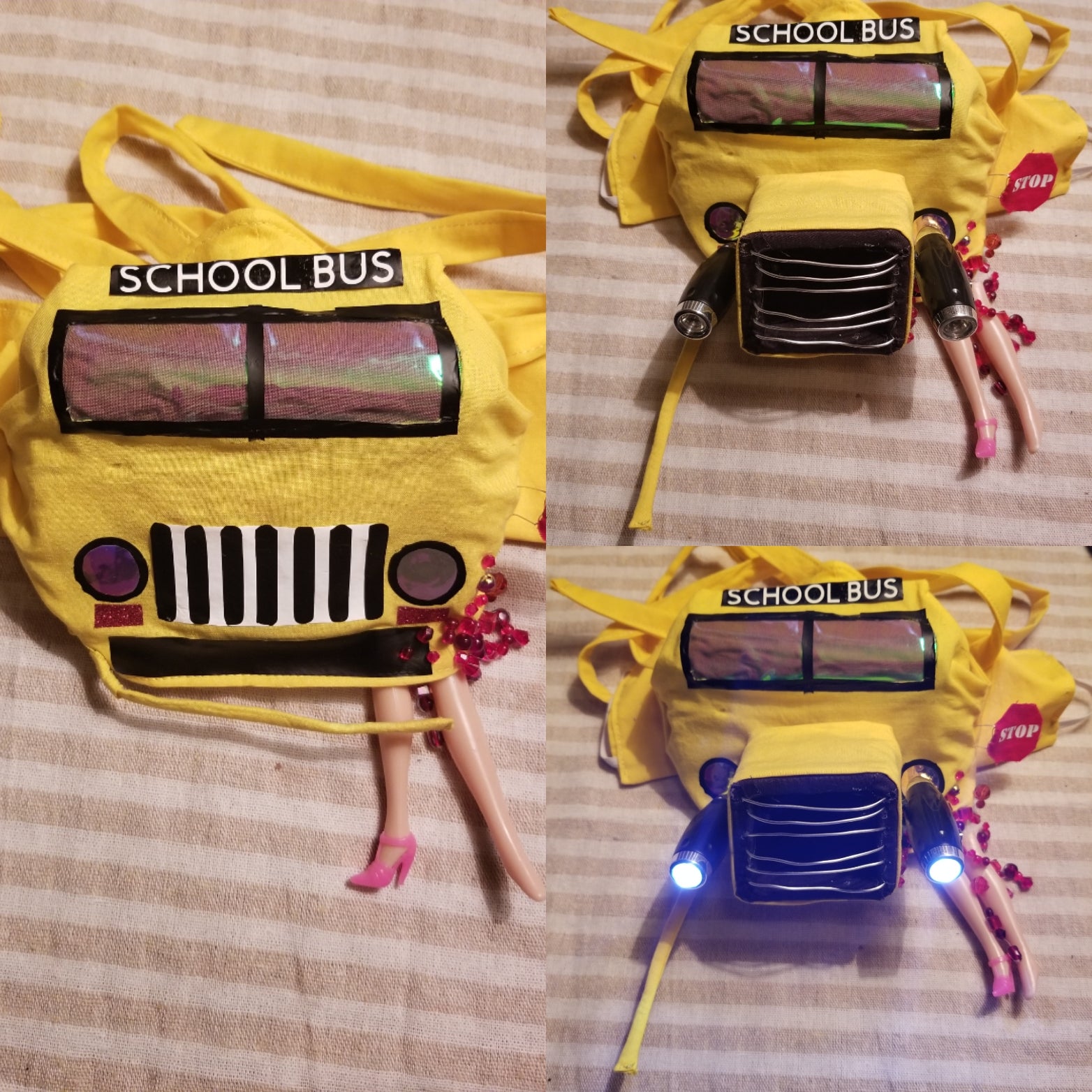 Young wanted her design to be big and fun but also to follow the CDC guidelines so the base mask is made with a two-ply cotton and a wire to help it better conform to the nose. The school bus—made of cotton atop a cardboard frame—is actually detachable, thanks to hidden magnets, and can be replaced by a 2D version for a more discreet look. Regina’s legs also can be removed with hook and eye closures. “It was a fun challenge and used a lot of different problem solving skills,” says Young, who plans to bring her mom, a big musical theater fan, to see the show.

Other Mask-making Experiences: In preparation for her Bat Mitzvah, Amelia and her friend helped raise money for Charlotte MEDI, which produces face shields for healthcare workers, by distributing homemade masks in exchange for donations. With the help of their moms, the girls made, promoted and mailed 187 masks in 13 days. 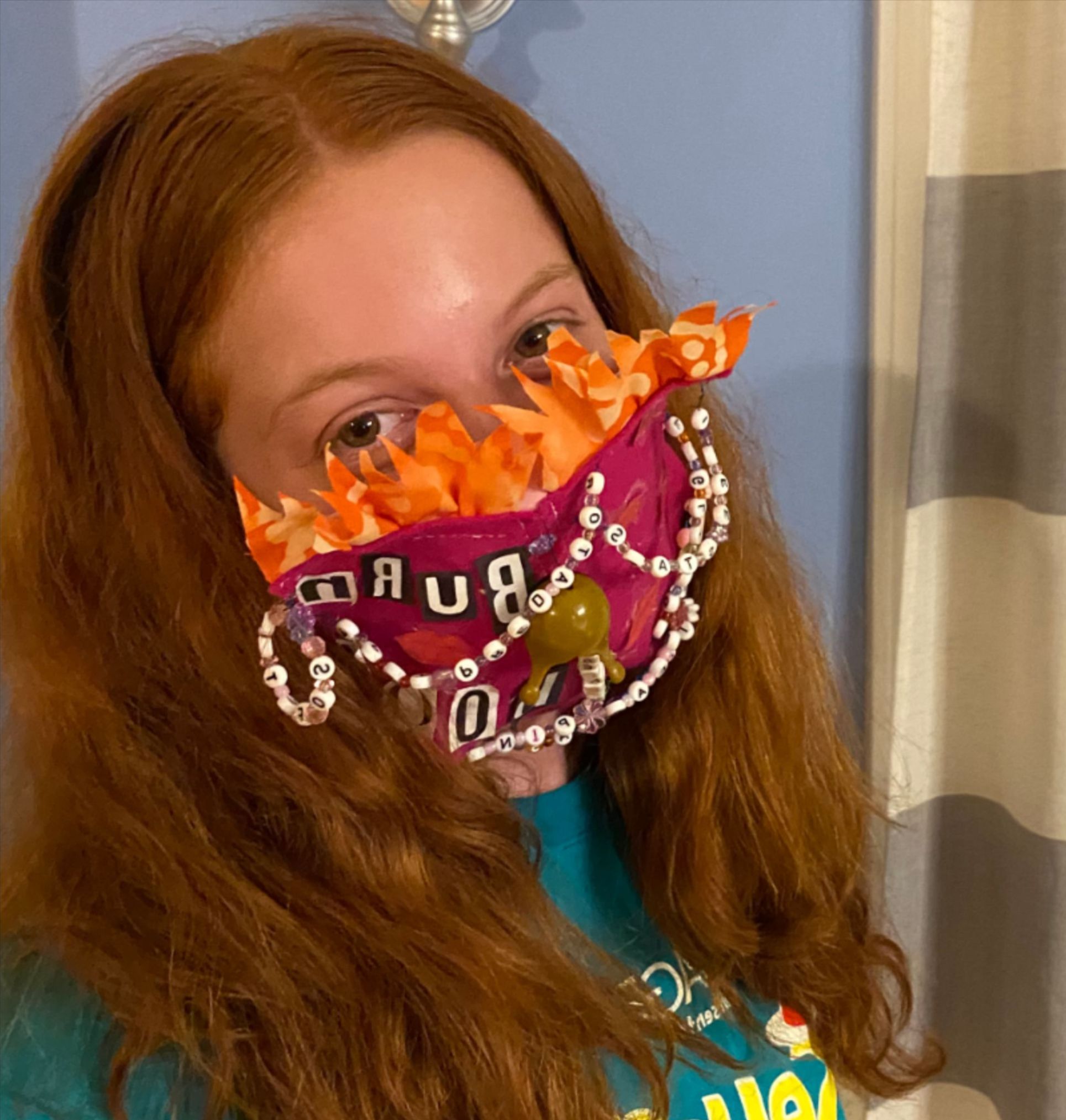 In the midst of a busy summer, filled with day camp and planning for her upcoming Bat Mitzvah, twelve year old Amelia Baron decided to participate in Sew for the Show. Although she didn’t make it in time for the first week’s competition, she couldn’t resist the challenge when MEAN GIRLS was announced as the second challenge. “I love the movie,” says Amelia, whose first introduction to the story was actually via the musical, thanks to a couple of friends. “I got obsessed with the musical and I don’t know, somehow I just heard that there was a movie too and I was like, ‘that’s interesting’—so me and my mom sat down and we watched the movie.” 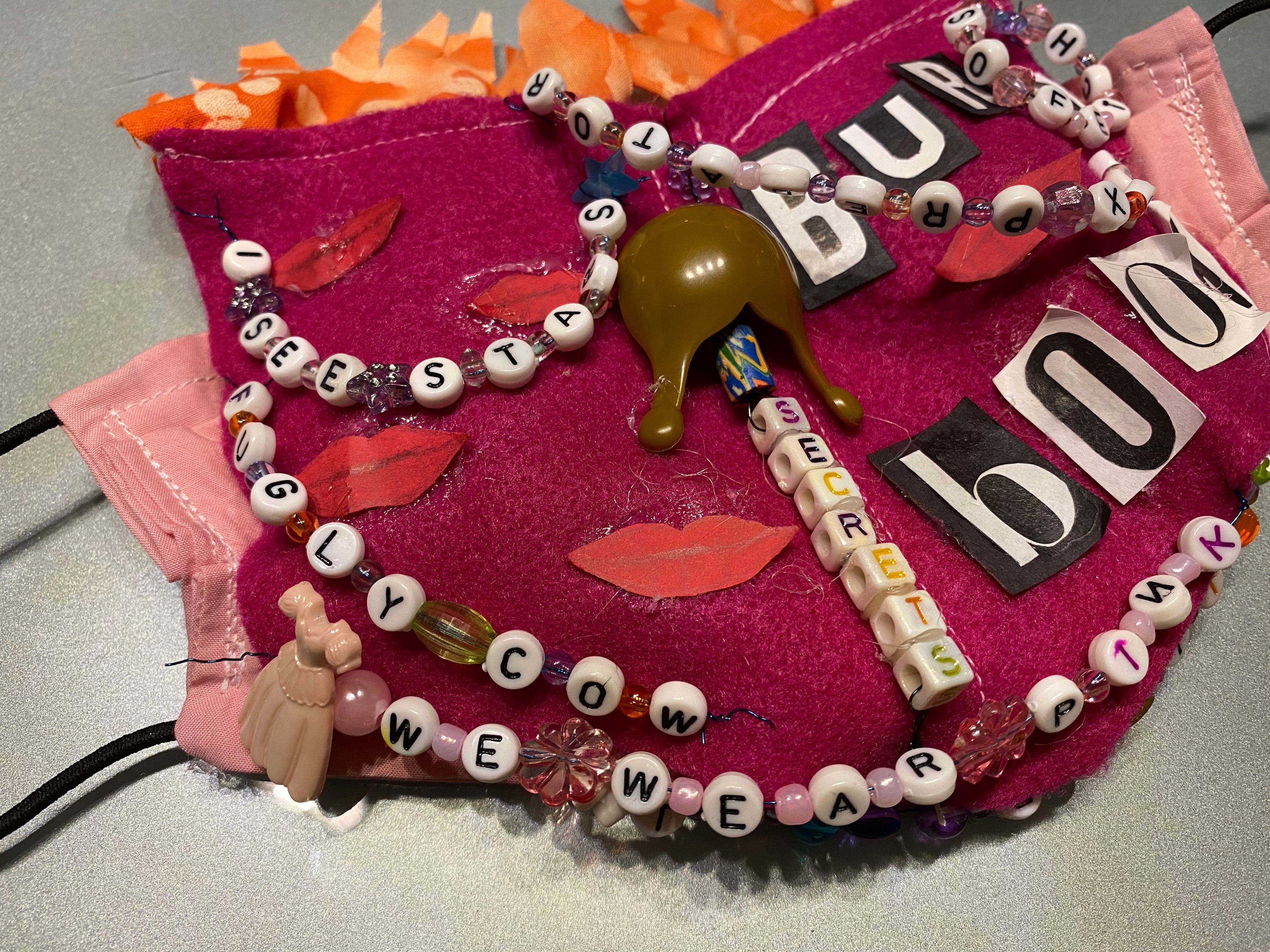 Amelia’s design concept started with the Burn Book, made of felt atop a pink base mask. As orange fabric flames sear the top edge, the mask features key phrases from the show made from wire and beaded letters. There’s some fun wordplay at work too, like the hair bead with secrets spilling out of it, a nod to the memorable line: “That's why her hair is so big, it's full of secrets.” Amelia says also she spent hours sifting through magazines to find just the right style of letters to spell out “Burn Book.” As for the show, Amelia looks forward to attending with her mom.

Other Mask-making Experiences: She has made nearly 300 masks this spring, including 100 that went to a nearby assisted living community through a project organized by the American Sewing Guild. 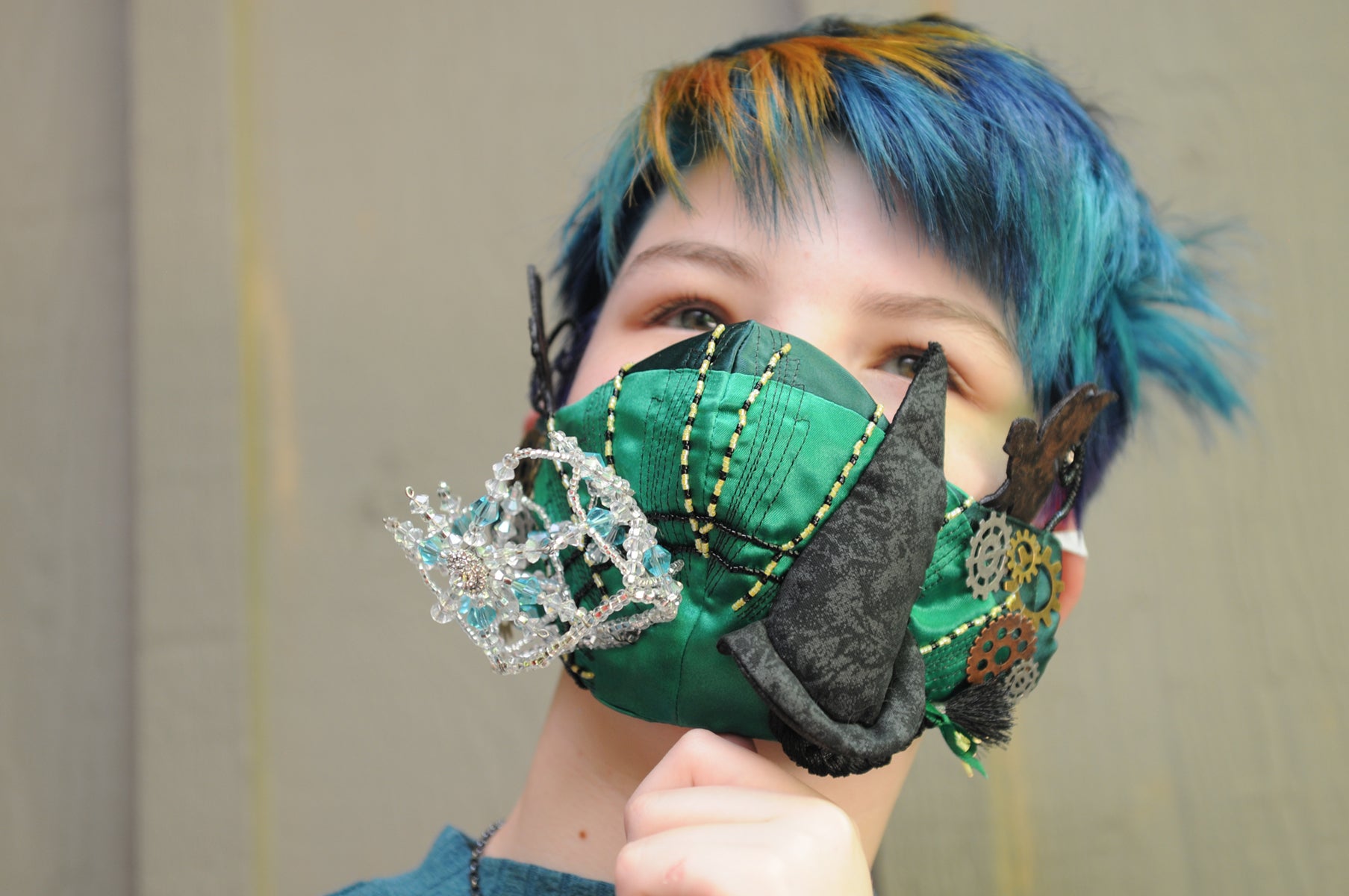 Reita Fisher loves a creative challenge, whether it is needlepoint and quilting or cake decorating and cooking. She has been sewing in one form or another since the fifth grade but now focuses most of her leisure time efforts on making garments. Although at least three generations of women in her family have sewn or quilted, she is mostly self-taught. “It just comes naturally to me,” says Fisher, who has two teenage daughters. “I love it!”

Fisher actually submitted elaborate mask designs for all three of the Sew for the Show challenges. The top border of her award-winning WICKED mask features two flying monkeys, whose tails are made of wire and black seed beads. The central part of the mask includes Glinda’s intricately hand-beaded crown and Elphaba’s black hat, stuffed with batting to give it form, and a brim made of wire so that it could be folded both up and down as it appears in the musical. The green fabric base also has real metal gears sewn onto it as well as yellow and black beads intended to represent the stage lights. 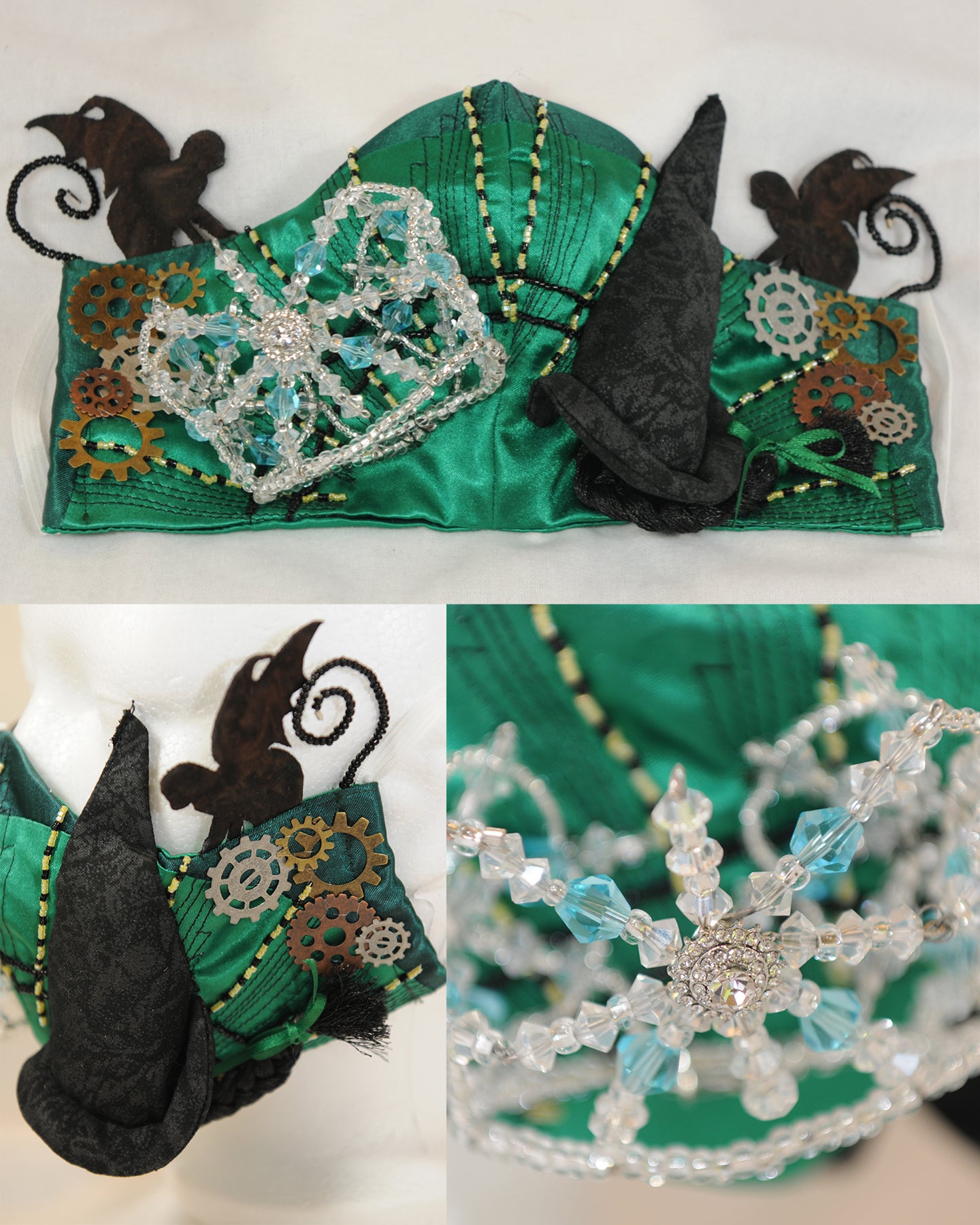 Fisher enjoys participating in creative contests because it pushes her to use different skills than she typically relies on as a freelance designer for print publications. “It’s been really fun,” says Fisher, who plans to bring her husband to see the show. “It’s given me an interesting, creative outlet.”  (Note: That is actually Fisher’s 15-year old daughter modeling the mask in the attached photos.)

Other Mask-making Experiences: She has made about 50 masks this spring for family, friends and her Girl Scout troop leader—a Nurse Practitioner—and her colleagues. 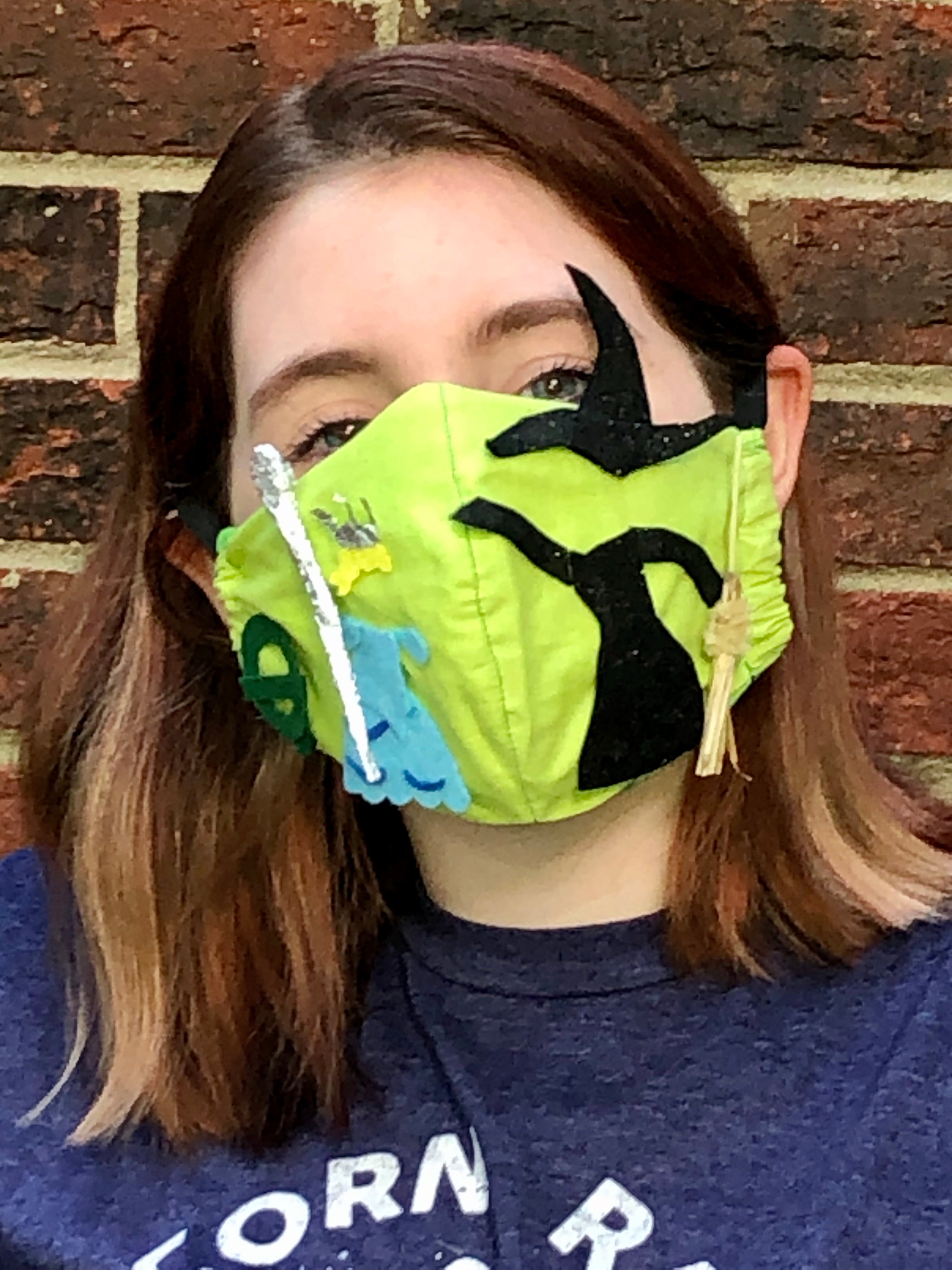 Twelve year old Serena Locke has long been a fan of the WICKED soundtrack. “I’ve wanted to see it forever,” she says. Serena, who loves making crafts, has been sewing for a couple of years. This project took a lot of determination as her first design concept—Elphaba’s smile and nose on a green base mask—didn’t come together as planned. “It just didn’t work,” says Serena, “My parents said it looked like SHREK.” So despite her painstaking efforts of finding the images, printing and gluing them, it was back to the drawing board. Thank goodness she didn’t give up! Her winning design features a simplified rendering of the two witches pointing at each other and arguing. Using felt, tin foil, a pipe cleaner and dried lemongrass from a potted plant, she recreated Elphaba's hat, broom, and dress as well as Glinda’s staff, dress and hair with a crown. Successfully gluing the pieces to the mask was the most challenging part of the project, says Serena, who managed to finish her creation in one day of work. (The living room still has felt pieces all over, she says, as a testament to the amount of trial and error that went into her finished mask!) Serena plans to bring her older brother as her special guest to see the show since he often listens to the soundtrack. 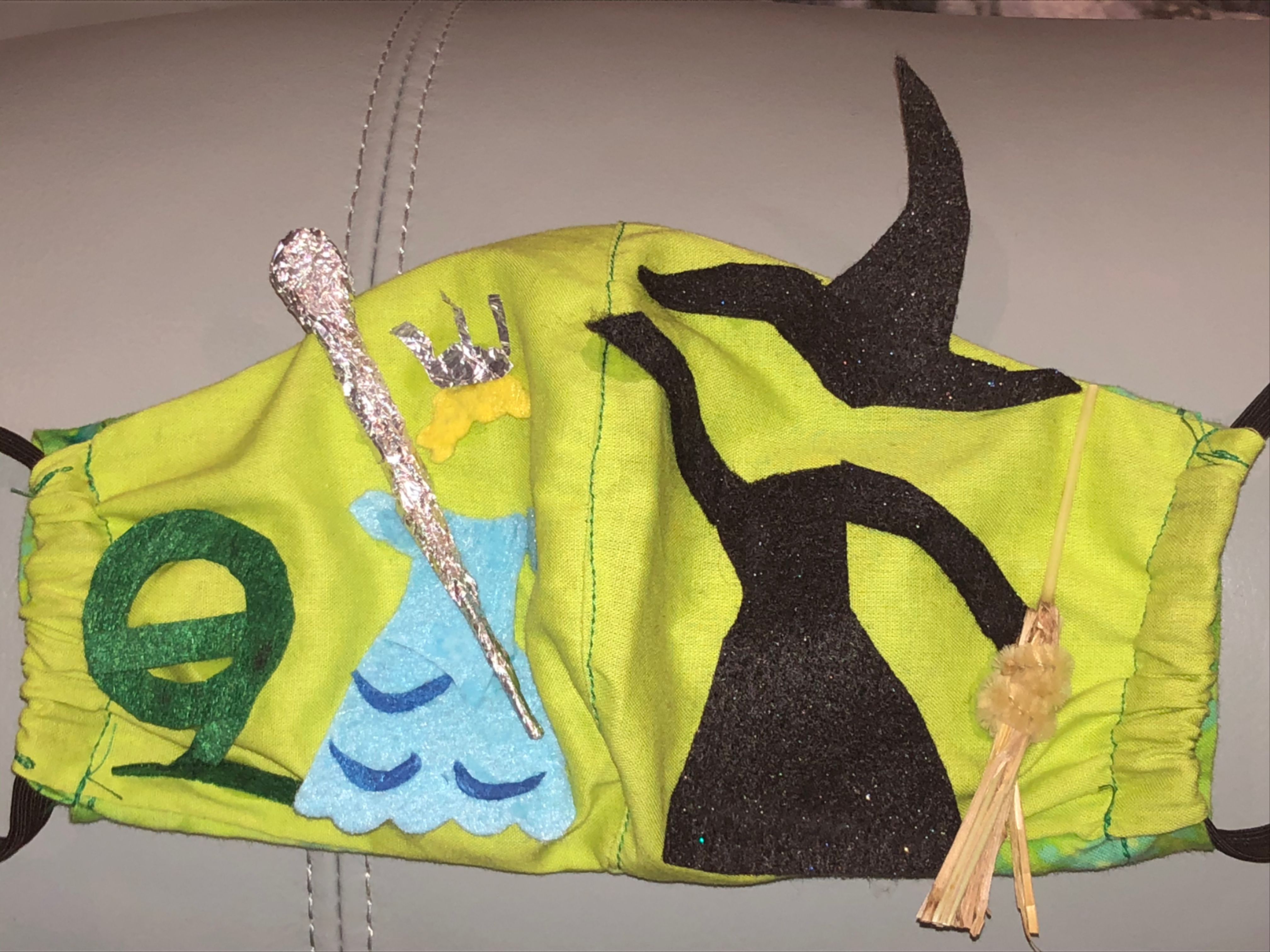 CONGRATS to all! We look forward to seeing you at Charlie and the Chocolate Factory, Mean Girls and Wicked! Can't wait to see the Grand Prize Winners we'll be seeing at ALL THREE!