The Charlotte International Arts Festival gives visitors a chance to glimpse breathtaking works from abroad as well as amazing new projects developed right down the street. Among the many performances and installations taking place, keep an eye out for those created by BPA Fellows.

These projects were commissioned by Blumenthal Performing Arts and created by local artists participating in the BPA Fellows Class of 2022. The program provides funding for artists to create new works. Expect projects that are bold, playful and aware!

One of the BPA Fellows projects is “Grid,” where dance and music come together in an outdoor performance that evolves each time you see it. Set to an original score melding classical and electronic elements, the dancers will perform using structured improvisation, following a rule system—or game structure—that will change every performance.

The dancers will move along axes, like those you’d find on graph paper or grid. Their movements and interactions with one another will be determined by the rules they establish at the rehearsal proceeding each of the three scheduled Friday evening performances taking place at during the festival (9/23 & 9/30 at 6:30pm). 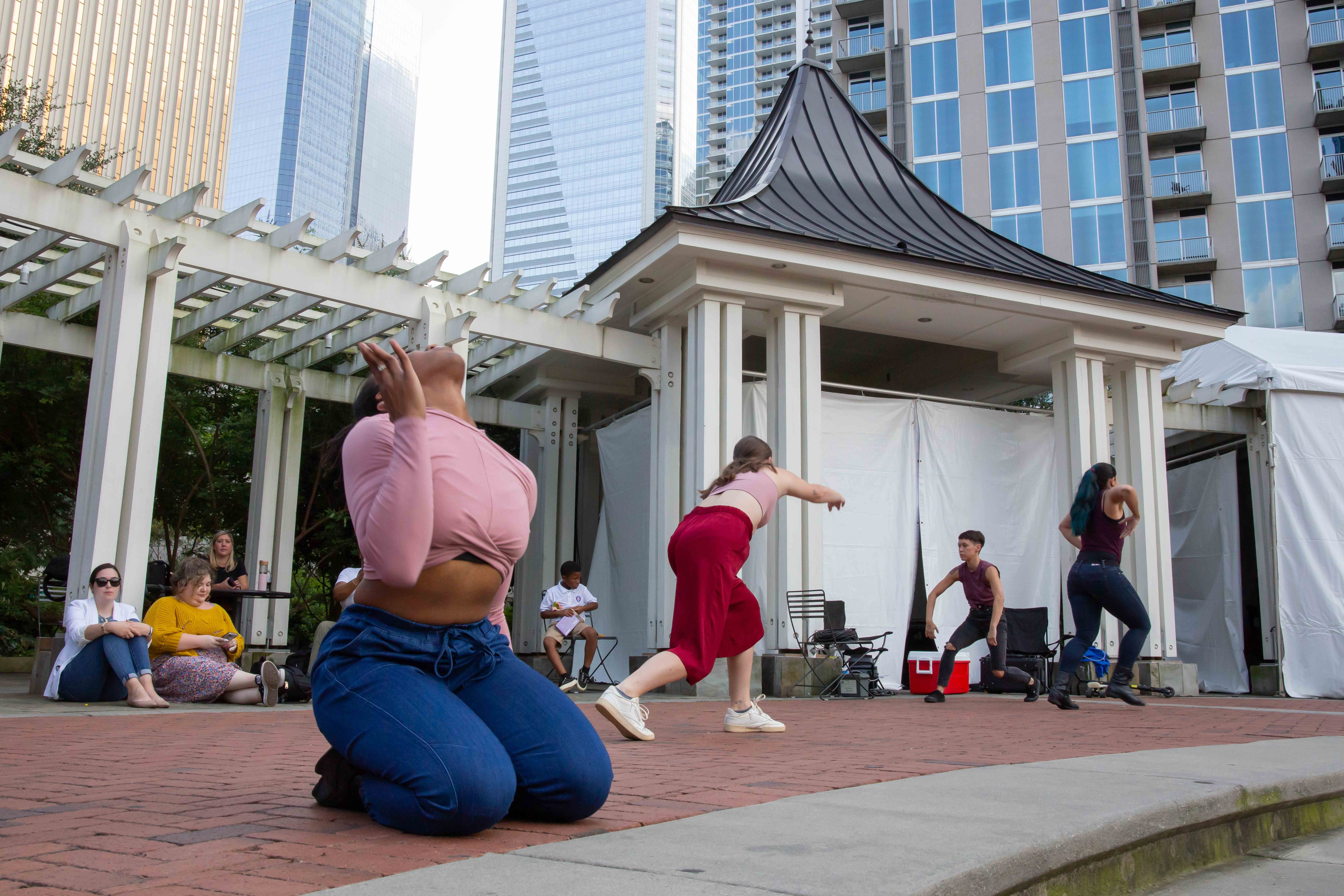 The technique is a fun and easy way to get people moving who may be shy about improvising, says Grid’s choreographer, Audrey Baran. She is the founder and artistic director of Baran Dance, a professional contemporary dance company in Charlotte.

Baran borrowed the concept from the work of Barbara Dilley, a post-modernist dance-maker who trained with Merce Cunningham in the 1960s. Much of Dilley’s work focused on dance and meditative techniques.

“I’ve been playing with this grid style for a while but just envisioning the possibilities within that has really developed,” Baran says. “It’s something I play with in classes with students and with my company too. And just seeing what people come up with is really amazing.”

As for the music, composer Ryan Persaud says it was carefully crafted to support the goals of the dance. You can hear strings and percussion that give it a classical feel, but it also has moments of chaos within it.

“[W]e wanted to have that rule system but also create the tension of being able to break away from it,” he says. “And so there are some very polyphonic, arrhythmic, atonal parts but they all the sudden drop back into the rule system that we created. You’ll be able to hear those tension points, being played with, throughout the dances.”

The two, longtime friends were originally slated to create the piece for Charlotte SHOUT last fall but the event was canceled just a few weeks before opening due to a resurgence of COVID. Since then, Persaud has created an all-new score for the work.

“I felt like we were different people after coming out of that experience. And we had other things we wanted to express a year later,” he says. “… It’s crazy what a year can do. And there’s a year of growth in there, there’s a year of learning production techniques, learning mistakes…”

Persaud, whose creative work spans a variety of genres including music production, art installations, and video animation, says he’s tried to take chances in this composition, by blending music from different eras and genres. That element of chance is something you can see reflected in the dance too, Baran says.

“Quite literally, I think, when you watch the dancers, you might think about people passing on the street or just these patterns that we have and timing of people,” she says. “Whether you go when the light changes or not can determine a lot of things. Then, what happens when these people interact and their paths cross? Do they ignore each other, are they influenced by each other?”

Both artists have previously been involved with productions taking place in Blumenthal spaces, but this is the first time they will have the chance to debut their own original creative work in that context.

“I’m excited to see all these international things coming and these big scale installations—to see what is coming to Charlotte and, reciprocally, to showcase Charlotte,” Baran says. “Because we’re sometimes this city with no identity. And we’re like: Are we a banking town? Are we a sports town?... And we don’t know. Arts is not usually at the top of the list.

“To bring other people and makers and artists in to show what grassroots artists like us are doing next to these giant international acts is kind of cool.”