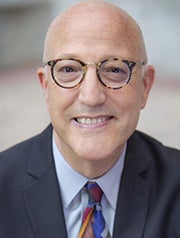 Tom Gabbard has been CEO of Blumenthal Performing Arts since 2003. The Blumenthal’s 110 employees manage six theaters in Charlotte, hosting over 1,000 performances annually, as well as extensive education programs, immersive projects, and the Charlotte International Arts Festival. During his tenure, the Blumenthal became a Top 10 market for touring Broadway shows in North America.

A member of the Board of Governors of the Broadway League, he serves on the Legislative Council and Finance and Intra-Industry Committees. He has been a voter for Broadway’s Tony Awards since 1997. In 2022, the League awarded Tom with Lifetime Tony Award Voter status.  In 2012 the League awarded him the Samuel J. L'Hommedieu Award for Outstanding Achievement in Presenter Management.

Other Broadway, Off-Broadway, national tour and London West End credits include Moulin Rouge, Ain’t Too Proud, David Byrne’s American Utopia, Death of a Salesman, Tootsie, Legally Blonde, Frost/Nixon, Matilda, Cinderella, Jagged Little Pill, Something Rotten, An American in Paris, Waitress, The Broadway Museum, and Back to the Future. He produced the New York run and the national tour of TRACES, and the national tour of 9 to 5. Tom is a leader in developing partnerships between the UK and US, working on over 25 UK/US transfers and London productions.