Van Gogh and Everyday Working People: A look at the artist and his inspirations

There are only a few more days to catch Immersive Van Gogh in Charlotte and experience larger than life projections of some of the most beloved artwork of all time. Dutch painter Vincent van Gogh created his masterpieces more than 130 years ago, but they continue to capture our imagination.

In this unique production, accompanied by a riveting musical score, many of his iconic works seem to come to life. Surrounded by light and color, it’s as if you’re right there with the artist as cicadas buzz, flowers bloom, stars twinkle in reflected waters, and candles burn inspiring van Gogh’s vibrant creations. But beyond his landscapes and still lifes, van Gogh was passionate about portraying everyday working people in his artwork. Although his style evolved dramatically throughout his artistic career, that interest endured. It makes the location for this phenomenal arts experience seem especially appropriate: rather than showing in a museum or traditional arts venue, Immersive Van Gogh takes place at Historic Camp North End, a space that has welcomed generations of workers.

A Prolific Artist Despite a Troubled Life

Vincent van Gogh’s life was tragically short, and he only began working as an artist at age 27. But in the 10 years he dedicated to artistic creation, he was incredibly prolific. Despite struggling with serious episodes of mental illness, he produced more than 2,000 works of art, including paintings, drawings and sketches.

“I think he had an incredible sensitivity to light, to color and the human condition,” says Maja Godlewska, associate professor of painting in UNC-Charlotte’s Department of Art & Art History, whose own artwork has been featured in museums and galleries around the world. We know much about what inspired van Gogh, thanks to the more than 600 surviving letters he wrote to his younger brother, Theo, as well as others penned to artist friends. Through these, we know what he contemplated in the world and tried to accomplish in his art. They are also windows to his loneliness and poverty, Godlewska says.

Most of us think of van Gogh as a master of painting nature and landscapes, but he was also passionate about portraying common working people in his artwork. Throughout his career, he created hundreds of figure studies and portraits of workers like farmers, miners, rural laborers, weavers and fishermen.

He felt a particular kinship with working people and thought capturing their essence with authenticity was a key element of modern art. He was very influenced by what he saw as he moved around from rural to urban landscapes and back again, trying to find his own place in the world. He tried various professions, including art dealer, school teacher and bookseller before taking up painting. Deeply religious, he even worked as an evangelist among coal miners in Southwestern Belgium for a time. In a letter to Theo, who supported him financially for much of his life, he writes: “The more artists would paint peasants and workmen the happier I should be. And as for myself, I know nothing I would do more gladly.”

One early piece he took particular pride in was “Les Mangeurs de pommes de terre” (The Potato Eaters). It’s one of the featured works in Immersive Van Gogh.

He worked for months on dozens of preparatory drawings before creating this now famous scene of a peasant family sharing a simple meal of potatoes, grown with their own hands. In it, he uses dark, earthy colors to evoke the rough, calloused features of these laborers and the harsh realities of their existence. Although the painting was heavily criticized by contemporaries, he believed it achieved what he had hoped in conveying an honest reflection of peasant life. It’s remarkable too how different it looks from his later works. We think of van Gogh’s use of color as a defining characteristic but his style changed dramatically as he progressed in his craft.

“His early work was extremely dark and monochromatic and then… There was a huge change in his palette,” Godlewska says.

Van Gogh would have found wonderful subjects for his artwork in the old Ford Motor Company Assembly Plant at Camp North End, the site for the current exhibition. Throughout its storied history, it has been filled with working people. Today, that includes many artists and others pursuing creative careers.

By presenting Immersive Van Gogh in this unique space, it’s also an opportunity to recognize the contributions of the many working people who have spent time in these halls.

Built in 1924 by the preeminent industrial architect of his time, Albert Kahn, the plant manufactured Ford’s famous Model T and Model A cars and employed hundreds of workers. According to the 1930 census, mechanics, painters, and other laborers from around North Carolina and as far away as England, Scotland and Ireland worked there. It produced more than 200,000 cars and trucks before it closed in 1932, a casualty of the depression. During WWII, the building was transformed into the The Charlotte Quartermaster Corps Depot, distributing goods to Army Posts throughout the Southeast. In the 1950s - '60s, it became a guided missile plant. Thousands of local workers have walked these halls over the years.

In 2020, Charlotte City Council designated the building an historic landmark.

Today, the old Ford factory is part of Camp North End’s 76-acre mixed use development, which includes award-winning restaurants, startups and studio space for many artists and creatives. Dozens of brightly colored murals drape the campus, symbolic perhaps of all the creativity just waiting to burst out and make its mark on the world. If there’s one message we take away from Immersive Van Gogh, Godlewska hopes it will be to support today’s working artists. You can get started at this exhibition, for which Blumenthal has partnered directly with many outstanding artists in the community: 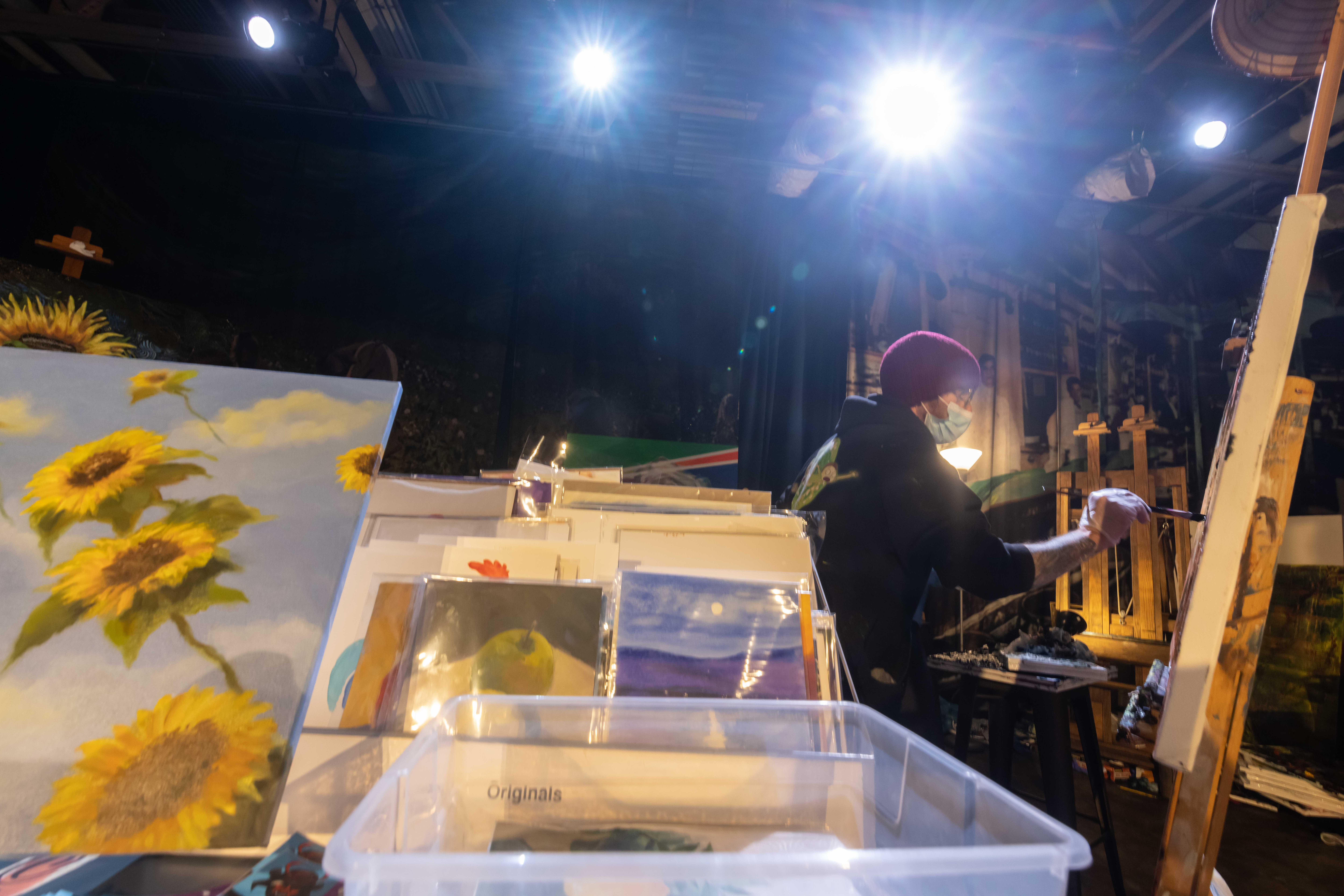 And you never know, as Godlewska says: “There may be another van Gogh somewhere.” 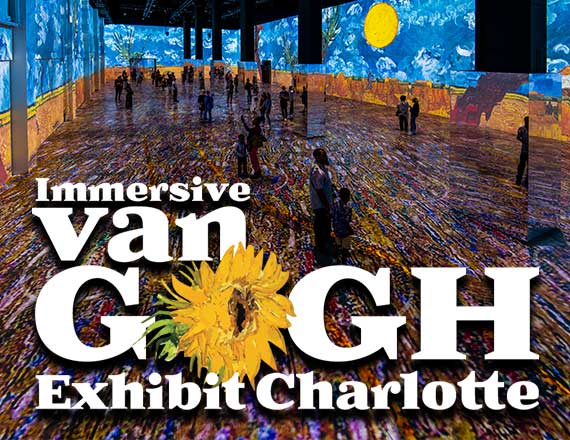